STUTTGART, Ark. – The heat of the day is tough on crops, but it’s the heat of the night that keeps Arkansas rice growers worried. By Sarah Cato. 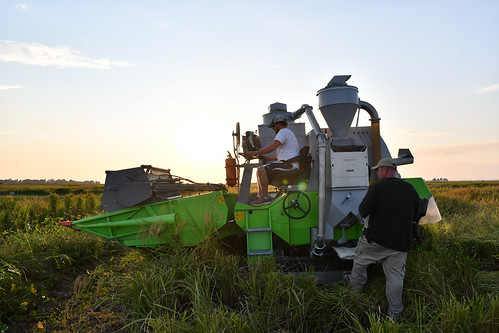 “If we don’t see more rain soon, we will absolutely see growers who run out of water and are not able to maintain enough moisture to maximize yield,” Hardke said. “We’re running through that at a very rapid pace.”

Rice has also been a victim of the warm temperatures. However, it’s not the beating sun that’s doing damage to the rice, but rather the hours of the day that rice depends on to be cooler.

Rice seeds are mostly  composed of starch. When nighttime temperatures rise during seed filling development, chalk occurs. Chalk is loosely packed starch granules and the air space between them.

Eshan Shakiba, assistant professor – rice breeding and genetics for the University of Arkansas System Division of Agriculture and one of the primary investigators of this study, said these high night time temperatures lead to chalky rice. Chalky rice grains are problematic in two ways. They’re opaque and consumers prefer their rice grains to be translucent and chalky rice tends to be brittle, breaking during processing.

“Rice quality is so important. If the rice is not of good quality, it goes nowhere,” Shakiba said. “In 2010 we saw that a rise in nighttime temperatures leads to higher amounts of chalk.”

Shakiba said it was this discovery that sparked a project that began in 2017.

“In 2017 we met with rice breeders, food scientists and other people at the University of Arkansas,” he said, “and we decided we need to address this problem.”

This meeting kicked off a five-year project that included three rice breeders and a plant physiologist from University of Arkansas System Division of Agriculture as well as three research scientists, Ramesh Dhakal and Manual Esguerra and program associate Courtland Cole Hemphill.

“We designed a study to test different cultivars in controlled conditions in greenhouses and growth chambers, as well as variable conditions in the field,” Shakiba said. “We’re trying to see which lines have tolerance to high nighttime temperatures.”

“We will do phenotyping in the field, greenhouse and growth chambers,” Shakiba said. “The lines will be evaluated for grain quality such as chalk as well as yield and head rice yield.”

“After phenotyping we will conduct an extensive genotypic study through advanced genetic approaches to identify genetic sources of tolerance to high nighttime temperature stress,” Shakiba said. “For genotyping we will be using advanced molecular technology.”

The data collected from the genotyping will be used for breeding programs.

“We will develop molecular markers that link to the genes associated with tolerance to high nighttime temperatures,” Shakiba said. “These markers will be used as marker assisted selection in breeding programs for identification of progeny lines possessing these desirable genes.”

This project is being sponsored by Arkansas Rice Promotion Board.