FAYETTEVILLE, Ark. — A young woman with her sights set on the governor’s mansion, the state attorney general and a state senator were all honored Wednesday at Arkansas 4-H’s biggest night – the Awards of Excellence banquet. 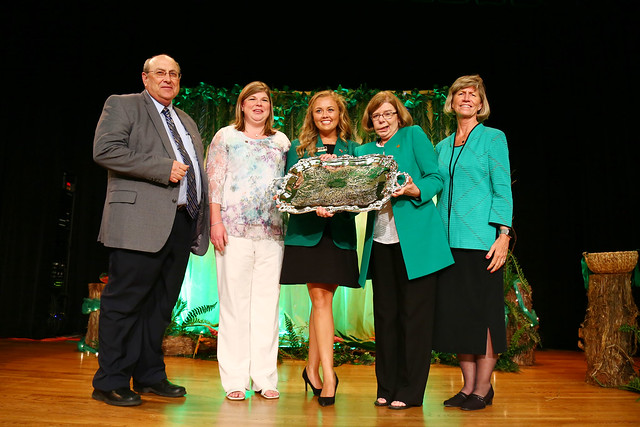 Gardner has been a 4-H for a decade. She has served as county council president and a state officer, as vice president of the Ozark District. For nine years, Gardner’s work has been guided by her “Pledge to Patriotism” platform.

Being fluent in Spanish, she has begun sharing the goals and opportunities of 4-H in Hispanic communities. She hopes to work as an attorney for the Department of Veterans Affairs.

During the finalists’ award luncheon  with Gov. Asa Hutchinson and his wife Susan at the Arkansas Governor’s Mansion, Gardner announced her intention to become Arkansas’ first female governor.

“We’ll have the place ready for you,” Susan Hutchinson said with a smile.

“If you want to see what tomorrow will be like, look at today’s 4-H youth leaders – these young people are going to better the world and shape all of our futures – we are in good hands,” said Rick Cartwright, associate vice president-extension. “I plan to vote for Sara.”

“Each year, we recognize those who truly give of themselves to this youth development program,” said Martha Ray Sartor, extension’s associate director-4-H and Youth Development and Family and Consumer Science. “This year, we honor two people who have been very generous in their support of our state’s 4-H youth.”

Rutledge is the state’s 56th attorney general and first woman elected to the office, this year’s first Friend of 4-H believes face-to-face conversations lead to real solutions. Since taking office, she began a Mobile Office program for all 75 counties, a military and veterans Initiative, a metal theft prevention program, and a Cooperative Disability Investigations program to stop fraud in Social Security disability claims.

In addition to her state responsibilities, she actively works on multi-state issues with other attorneys general. She also re-established and co-chairs the National Association of Attorneys General Committee on Agriculture.

This year’s second Friend of 4-H, state Sen. Bruce Maloch, grew up on the farm near Emerson, where he still farms today. In his youth, he was active in 4-H and served as state president and national officer of the FFA.

Maloch also served as chairman of the Arkansas FFA Foundation and Arkansas Cattlemen’s Foundation. He has long been active in Arkansas Farm Bureau activities and supporting agricultural youth by donating his auctioneering services for charitable events throughout the area at multiple junior livestock sales. Maloch has also hosted  state 4-H Livestock Leadership Academy program at the state Capitol.

The senator and his wife live on a farm south of Magnolia, where they raise registered Brangus cattle and enjoy spending time with their three children and five grandchildren, all of which have taken part in 4-H livestock projects.