Rohwer Field Day: Unraveling the mysteries of taproot decline; use of ag drones

(Newsrooms: with art and video at https://flic.kr/s/aHsmpuKMdx )

Taproot decline, a disease first noticed in Arkansas, Louisiana and Mississippi in 2007 and formally identified in 2017, was one of the topics on the agenda during the 2018 Rohwer Field Day hosted by the University of Arkansas System Division of Agriculture. More than 100 growers, consultants, extension personnel and researchers weathered the southeast Arkansas heat and humidity for the event. 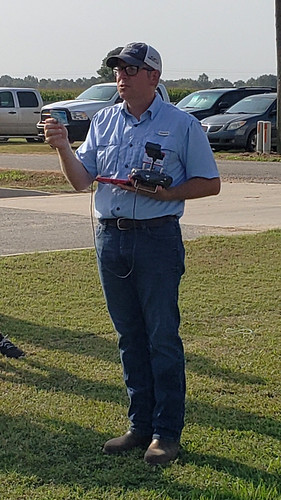 UAS — Terry Spurlock talks about using unmanned aerial systems in agriculture during the July 19, 2018, Rohwer Field Day. (U of A System Division of Agriculture photo.)

Terry Spurlock, associate professor and extension plant pathologist for the Division of Agriculture, discussed variety trials at Rohwer, to see which of the soybeans could tolerate or resist the fungal infection. It was one of two presentations he gave during the field day. His other presentation covered the use of drones, or unmanned aircraft systems in agriculture.

Spurlock said Division of Agriculture scientists banded together with colleagues at LSU and Mississippi State to uncover the mystery that was damaging soybeans.

“We did all the work between the three institutions. The disease is caused by a fungus that had never been described before,” Spurlock said. “It wasn’t in any of the DNA databases.”

Eventually, the pathologists found that the as yet-unnamed fungus was a Xylaria, known as wood-rotting fungus that produces “dead man’s fingers” commonly seen in forests. When the fungus infects onto a soybean seeding, it causes the taproot to rot and kills its young host plant. “Infections of more mature soybean cause symptoms such as stunting, severe chlorosis and yield loss,” he said.

“Taproot decline is a disease of increasing importance to Arkansas,” he said. At the field day, “I was telling farmers about how bad it’s gotten. It’s been as bad this year as it’s ever been.”

The disease has been found predominantly in southeastern Arkansas and as far north as Missouri and Tennessee and was also found in Alabama last year.

With the variety trials, “we were looking at commercial varieties to not only determine which are susceptible, but also to see some that might have some tolerance or resistance to this disease that we can recommend to growers,” he said.  During the field day, “we had plenty to show from the fields;  a good plot versus one ravaged by disease. It was a good day. “

Spurlock said the “trials are being done in triplicate in Louisiana and Mississippi and Arkansas. We’ll put all the data together at the end of the year. We’ll have that data by the winter production meetings.”

The research on taproot decline is being supported by soybean promotion boards in all three states.

Spurlock and Larry Purcell, distinguished professor-Crop, Soils and Environmental Science for the Division of Agriculture, each held talks about drone use in the field.

“What we were trying to accomplish with that demonstration was to introduce them to a good entry level ‘commercial grade’ UAV that would provide them useable data for their particular farm; one that’s durable and versatile, as well as address limitations,” Spurlock said.

Spurlock demonstrated with a DJI Phantom 4 to “show how they operated and what their expectations for data output would be.”

He also fielded questions about what certifications were required to operate a drone legally on a commercial operation – even if it was the pilot’s own land. Spurlock and Purcell also showed growers how easy drones were to fly.

Spurlock used the Precision Flight app from Precision Hawk to let the drone fly itself. The app allows the pilot to set boundaries for the drone and the drone figures out its own flight path within the boundaries.

“You don’t have to do anything,” he said. “You’re not touching a joystick or a hand controller unless you absolutely have to, like if you see a plane coming and you need to land it now.”

Mention of commercial names does not imply endorsement by the University of Arkansas System Division of Agriculture.