LITTLE ROCK – Chainsaws became the soundtrack this week as Arkansans cleaned up after storms Saturday unleashed a barrage of large hail, high winds and lightning that left behind downed trees, damaged homes, farms and businesses, and thousands without electricity.

“During the predawn hours, a huge hailstorm tracked from Fayetteville toward Clarksville and weakened,” the National Weather Service at Little Rock said in its online event reporting. From there, the storm moved southeastward at 40 to 50 mph along the Arkansas River “and bowed out. This bowing line of storms cranked out 70- to 90 mph winds at times.” 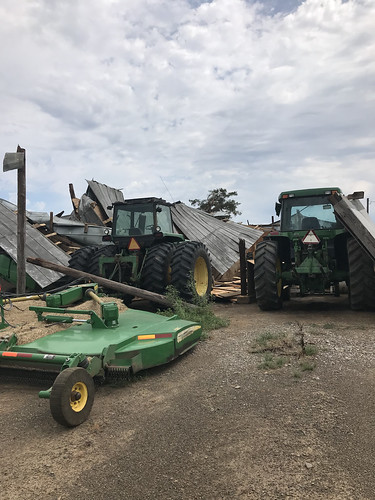 COLLAPSED — High winds from a July 21, 2018 storm, in Perry County caused equipment sheds to collapse on farm tractors and other vehicles. (U of A System Division of Agriculture photo by Kevin Lawson).

More than 63,000 people were without power as utilities scrambled to scout damage and bring linemen in other states to help restore electricity.

“We had a lot of structural damage in Perry County as 90 mph straight-line winds came through,” said Kevin Lawson, Faulkner County extension agent for the University of Arkansas System Division of Agriculture, whose hometown of Houston was hard-hit. “Lots of trees down and power is still out in places. Crops look fine, but we did have a horse fatality.”

On social media, Lawson shared photos of corrugated metal buildings collapsed on a tractors, implements and other farm equipment and an irrigation pivot thrown on its side.

Jeremy Ross, extension soybean agronomist for the Division of Agriculture, said Sunday he “had received two reports of hail damage to soybeans from north of McRea and the other near Hickory Plains.” Ross photographed soybean acreage were nothing but stems were left after hail shredded the leaves.

White County Extension Agent Jan Yingling said at one of the farms, the soybeans were a total loss.

“Not sure of the economic damage at this time,” she said and estimated that 160 acres each of soy and rice sustained storm damaged.

Robert Goodson, Phillips County extension agent for the Division of Agriculture, said Sunday there were outages in Monroe County and a small percentage of corn blown down by high winds.

“We did get some beneficial rain – a couple of inches in places,” he said. “This might be enough in places to finish the corn crop.  Just have to wait and see.”