By Jessica Wesson
U of A System Division of Agriculture
July 13, 2018

LITTLE ROCK – The 2018 Arkansas 4-H champion forestry team is not skimping on training time in their effort to bring home for the national title for the third time in a row. 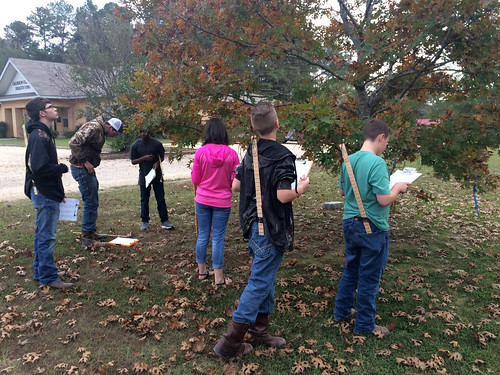 This 4-H team is being led by Jaret Rushing, Calhoun County extension agent for the University of Arkansas System Division of Agriculture Cooperative Extension Service. Rushing, who is leading a team to nationals for the second time in his career, said that his state-title-winning team members are dedicated and ambitious.

“I feel like my team won this year because of preparation time alone,” he said. “These kids set out a goal to win this contest this year and even turned down an opportunity to compete in the Regional Conservation District Contest in Farmerville, Louisiana, to prepare for the event.

“We put a lot of practice time in all areas of competition. I'd say collectively over the entire competition season, we've practiced, studied, worked about 100 hours,” Rushing said.

Rushing said that his team members are very talented, and, for a couple team members, this was their last chance at a state title.

“First and foremost, I couldn't be prouder of these kids. Lowery and Morgan have been on the team since they were 6th graders and this being their last shot at a state title was extremely meaningful,” he said. “Strickland and Beaver were definitely the backbone of the team this year with Evan leading the way at state being one of the youngest high point individuals I've personally ever coached.”

Mark Strickland, 17, said that forestry has been a passion of his for quite a while.

“When I was in fifth grade I went to a science camp, and I did really good with the tree portion. Coach asked me to join his team,” he said. “I love being outside, and it’s just something I love to do.”

Strickland mentioned the new opportunities that winning state opened up for his team.

“I was pretty excited, because I get to go to West Virginia,” he said. “That’s somewhere I have never been before. With all of the hard work that finally paid off, I felt good about myself and my team.”

Rushing’s outstanding efforts inspired the team to go above and beyond.

Strickland is anxiously awaiting the arrival of the national contest for a few different reasons.

“I am looking forward to just having a good time and my team performing to the best of our abilities,” he said.

For more information about 4-H forestry teams in your area contact your local county extension agent or visit www.uaex.edu.