LITTLE ROCK — Forage management has always been the foundation of a successful livestock operations in Arkansas and elsewhere, and keeping a close eye on those forages in drought conditions is fundamental to that success. 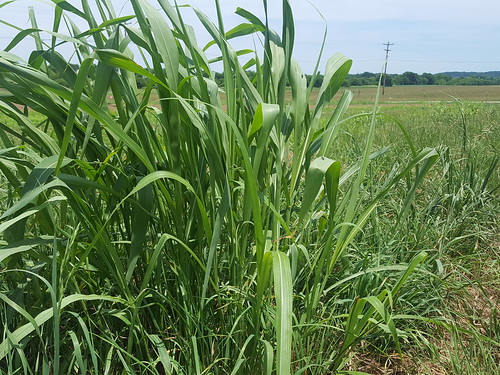 Johnsongrass, a good quality forage found widely throughout Arkansas, offers its own challenges in such conditions, said John Jennings, Professor of Forage for the University of Arkansas System Division of Agriculture.

“When it becomes stressed from drought, johnsongrass can produce prussic acid — also known as hydrocyanic acid — or can accumulate nitrate, both of which are very toxic to livestock,” Jennings said.

Other grasses, such as sorghum or sudan, including haygrazer, greengraze, Sudex and sudangrass, can also develop prussic acid and accumulate nitrate. Jennings said its important for growers to be able to identify the differences in these toxins, and how toxicity levels may be measured.

“It’s difficult to predict how much prussic acid toxin may be present in the forage,” Jennings said. “There are no reliable field or routine laboratory for measuring toxic levels of prussic acid in forage. Lab tests can confirm prussic acid poisoning for dead animals, but the amount of toxin that results in death hasn’t been established for any routine tests, and field testing is not available.”

What is known is this: Hydrocyanic acid (HCN), or prussic acid, is generally found in stressed johnsongrass or sorghum, and is formed by enzymatic action on compounds called cyanogenetic glucosides.

When these compounds are broken down in the rumen of cattle, the cyanide is absorbed and combines with the hemoglobin in the bloodstream. This prevents the red blood cells from releasing oxygen to the body tissues, and suffocation occurs. One diagnostic symptom of prussic acid poisoning is bright red blood since it is full of trapped oxygen. Prussic acid poisoning occurs rapidly with affected animals dying in the field.

Wilted and drought stressed plants are most likely to develop prussic acid. During early drought stress, the grass may appear normal in the morning, but can wilt during afternoon heat, which increases toxic potential.

The amount of prussic acid is higher in young plants than in older ones, and the toxicity of leaves is higher than that of stems, Jennings said. Prussic acid poisoning potential is very high for johnsongrass forage that is shorter than 18 inches tall, wilted forage or for a new flush of growth soon after a rainfall or after hay cutting. Prussic acid concentration decreases as plants become taller and more mature.

“Many producers believe the white powdery substance commonly seen on johnsongrass stems in late summer is prussic acid residue, but it’s only common powdery mildew fungus and is not considered toxic to livestock,” Jennings said.

Prussic acid dissipates when the forage dries, so well-cured hay is considered safe, Jennings said.  If johnsongrass patches are mowed before allowing animals to graze a pasture, make sure the cut johnsongrass is dried completely to allow the prussic acid to dissipate.

For more information on prussic acid, growers should consult the Division of Agriculture publication “FSA 3069 Prussic Acid” at https://www.uaex.edu/publications/PDF/FSA-3069.pdf.

Growers can consult “FSA 3024 – Nitrate Poisoning in Cattle” for information on toxicity levels at ttps://www.uaex.edu/publications/pdf/FSA-3024.pdf.

“Drought, shade, and sometimes potassium deficiency can cause a reduction in the activity of a specific plant enzyme that functions in the conversion of nitrate to precursors of plant protein, which allows accumulation of nitrate,” he said.

Similar to prussic acid poisoning, nitrate poisoning causes internal suffocation of the animal. However, nitrate prevents the blood from picking up oxygen to carry to the tissues. A diagnostic symptom of nitrate poisoning is dark, chocolate-brown appearing blood, which is a result of lack of oxygen in the blood, Jennings said.

Other things growers should keep in mind include: