All lined up: Row rice acreage more than doubles in 2018
skip to main content

All lined up: Row rice acreage more than doubles in 2018

STUTTGART, Ark. – In parts of Arkansas, the signature sweeping curves of rice field levees are being replaced by straight rows, a change that can provide significant cost savings for growers.

Most of the rice in Arkansas is grown in controlled floods. The curved levees follow the field contours enabling growers to maintain water levels and keep roots submerged. However, “row rice” — so called because it is grown like most other row crops in the state, furrow irrigated and without benefit of a controlled flood — is gradually expanding its footprint. 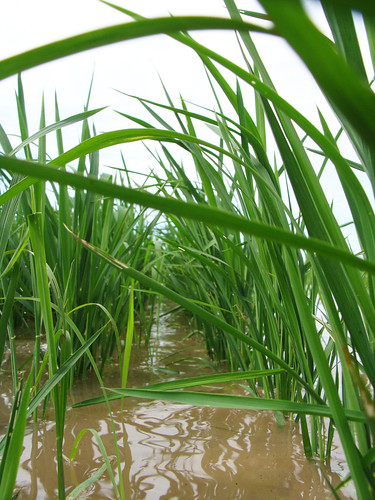 LOW DOWN -- View from between rows of rice. Taken July 2, 2014, in Lonoke, Arkansas (University of Arkansas System Division of Agriculture photo).

“It’s certainly very scattered,” Hardke said. “For the most part, you don’t have individual growers going too heavily into it, although there are a handful who have. Many growers are just trying a field here and there. But spreading that across 1.4 million acres, ‘here and there’ starts to add up.”

Trent Dabbs, of Stuttgart, and his father have been working row rice for more than a decade. In the beginning, “quite a few people thought we were crazy, but it’s worked out pretty good for us,” he said. They started small – one field, 40 acres. This year, the Dabbses have about 200 acres in row rice and may expand that acreage again next year.

The technique has given life to the old trope “less is more.” Row rice means “less time creating levees and putting in gates” and “during harvest, there’s less wear and tear on the combines. You’re not jumping levees and it’s not as muddy,” Dabbs said.

Hardke said the technique offers growers several avenues for cost savings, beginning with field preparation practices. Preparing a field for flooded rice can involve as many as nine or 10 passes in diesel-fueled tractors and other equipment, between building levees and leveling fields. Fields for row rice, on the other hand, can often be prepared with relatively little work.

“When you’re not having to prepare the ground as intensively, there’s obviously going to be some fuel cost savings,” Hardke said. “The savings can be really drastic when they’re using last year’s soybean beds, with maybe one pass to pull the middles out. That’s $50-$70 an acre difference, just in the straight up fuel and equipment cost.”

“Without having levees, the day-to-day water management on a row rice field is drastically easier than it is with your typical, flood-irrigated system,” Hardke said. “Setting up polypipe is comparatively simple. From then on, every time you want to irrigate, you just turn it on. You’re watering down the rows and field, versus trying to establish and maintain a flood.”

“We’ve had to make some changes in our production practices; we changed our fertility and spraying to make it work,” Dabbs said. “Instead of doing a large pre-flood shot of fertilizer, we split it into three applications to spoon feed the rice and not lose nitrogen.”

Even with the changes in production practices, “we don’t see a big yield drag,” Dabbs said. “We’re saving water and labor and you can stand to lose 5-10 bushels and still come out the same as if you were doing it conventionally.”

Bringing rice out of a flood can make the crop more vulnerable to fluctuations in the weather.

“There are increased risks of running into a moisture deficit,” Hardke said. “If that happens during some of the critical times for rice development, there’s yield loss associated with that.

“Having a flood also makes the environment more stable, in terms of temperature fluctuations,” he said. “The flood helps to stabilize the microclimate a little bit.”

While the technique does give up the stabilizing aspect of a flood, growers do typically gain the advantage of a more quickly drying field, increasing harvest efficiency.

“Without that season-long flood, the field dries out so much faster, once you’re done irrigating,” Hardke said. “That facilitates getting in more quickly with a combine and not rutting the field up.”

Dabbs said he uses row rice on sandier areas, fields that have difficulty holding water, and fields where he might plant no-till soybeans behind rice.

Yields in row rice have historically been similar to those in flooded rice, although 2017 may have provided a skewed example for Arkansas growers.

“One of the dangers we tried to emphasize was that some of last year’s success was due to weather conditions,” Hardke said. “We had very good yields across the board, with excessive amounts of in-season rainfall, which made growing rice in those environments that much easier. We had some concerns going into this year that we would end up hot and dry, and well, we have. That’s going to make managing those fields a little more difficult, depending on local conditions and agronomic set-ups.”

Ultimately, he said, growers’ success in row rice will come down to successful management practices.

“There are several areas for potential cost savings with growing furrow-irrigated rice,” Hardke said. “But we usually tell people, just to be on the conservative side, to assume a 10 percent reduction in yield, and if those economics don’t still work for you, you should be cautious about planting too much row rice in your overall acreage.”

The practice is not currently covered by the Risk Management Agency of the U.S. Agriculture Department, but Dabbs said efforts are under way to encourage RMA to include row rice.

Arkansas is the No. 1 rice state in the U.S.,  producing roughly half of the nation’s rice.

To learn about rice in Arkansas, contact your local Cooperative Extension Service agent or visit www.uaex.edu.