“Back in the 1990s, there was a period when metal spikes – which had been customary on golf shoes – began to be banned,” said Doug Karcher, professor-horticulture for the University of Arkansas System Division of Agriculture. “Not only because of the damage to the turf, but also because of the damage they’d do to the course infrastructures like wooden bridges and floors in the clubhouse. By 1997, most of the courses banned metal spikes.” 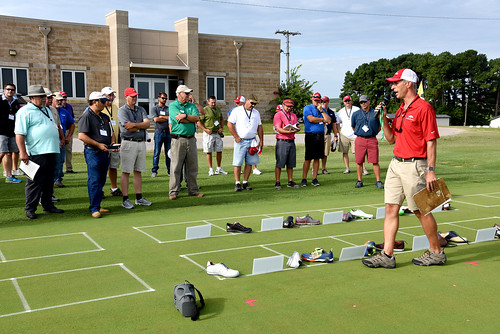 Dr. Doug Karcher describes research on how much damage different types of golf shoes do to putting greens. Taken Aug. 3, 2016. (U of A System Division of Agriculture photo by Fred Miller)

While today’s golf shoes are light years from those metal spikes, they must still serve the same purpose; be comfortable and offer the player enough traction in the grass to anchor an effective swing. That same traction also means the shoe carries the potential to tear the turf.

It may seem a bit esoteric, but with U.S. golf courses averaging more than $900,000 a year in maintenance (See: http://www.golfcourseindustry.com/article/state-of-golf-industry-reinvestment/), knowing what types of soles are best for the turf is no small thing.

“The quality of the putting surface is how supers are judged and make a living,” Karcher said. “If the shoes cause damage to the greens, it can negatively impact their career.”

In spring 2016, Karcher and Thomas Nikolai, PhD, a.k.a, “The Doctor of Green Speed” from Michigan State from the department of plant, soil and microbial sciences, set out to look at the issue with support from the U.S. Golf Association.

The idea for the research began a year earlier.

“In 2015, we saw on social media and on superintendents’ bulletin boards complaints about new shoe models,” Karcher said. “Some claims were being made that the newer shoes were doing as much damage as some of the worst alternative spikes of the 90s.”

With that in mind, Karcher and Nikolai formulated two major objectives: 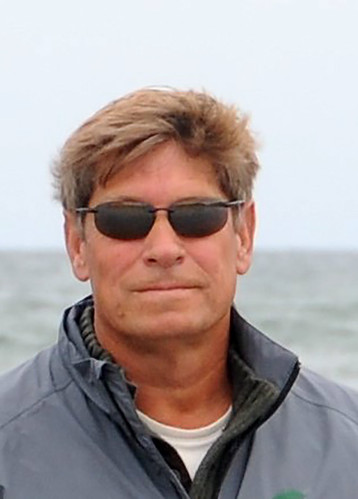 1) To look at a variety of different golf shoes to see if they were as bad as the metal spiked shoes. Their research including those with very aggressive treads and cleats and those that are more like a teaching shoe a club pro would wear all day long. “What was it about the design that makes them cause damage: The type of cleats? Number? Spacing? Type of tread?”

2) Secondly, “to see if there are management practices that course superintendents use that could cause more or less damage by a given golf shoe,” Karcher said. The two looked at sand top-dressing, irrigation, grooming and fertilizer rates on four different greens in Michigan State and Arkansas and on bermuda and bentgrass and annual bluegrass.

For objective one, the two simulated foot traffic on turf plots with different putting green heights at more than a dozen sites a across Arkansas, Michigan, Naples, Florida, and Carnoustie and St. Andrews, Scotland, home of the world’s oldest professional golf tournament, The Open.

“We’re doing research on how to best take care of the putting surface so it minimizes the impact of any shoe,” he said.

Karcher said “Today’s shoes do not do as much damage as the metal spikes. It’s just a perception.”

Karcher said that “today’s superintendents do such a good job, the grasses are so improved, better groomed and close to perfect that any imperfection caused by a shoe is more noticeable today. It’s as if the supers are victims of their own success.”

Nikolai added, “Ironically, golf course superintendents have created such smooth putting surfaces that some golf cleat/sole designs have become too aggressive. Case in point, almost no one complained about spike marks prior to the 1990s.”

Another finding is that the shoes many golfers and superintendents complained about the most had flatter soles and fewer cleats.

“They only had seven versus nine or 11 for other shoe models,” Karcher said. “With fewer cleats, there were more pounds per square inch per cleat – making them more aggressive on the turf.”

The researchers looked at wear on the turf, simulating 30 rounds of golf on a putting green.

“We had golfers grade the surfaces, A, B, C, D or F. An ‘A’ would show no sign of being walked on. ‘B’ has some signs, but won’t affect the putt,” Karcher said.

There was also no key difference between annual bluegrass and bentgrass. Both showed a fair amount of damage, but bentgrass showed slightly more damage perhaps because of its stolons – sideway stems, which annual bluegrass lacks.

Where play is heavy, the turf may need more irrigation for general wear tolerance and recovery, but the turf must also be dry enough to play.

“It’s a fine balance,” Karcher said. “Most superintendents are using portable meters to use just the right amount of water.”