By Ryan McGeeney
U of A System Division of Agriculture
July 29, 2016

LITTLE ROCK — After a week of weather described as “oppressively hot” by Crittenden County Cooperative Extension Service agent Russ Parker, agricultural experts are advising growers across the state to buckle up for the final weeks heading into harvest, as pest pressure is expected to intensify. 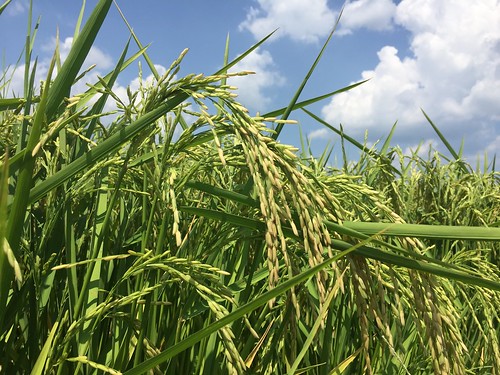 Gus Lorenz, extension entomologist for the University of Arkansas System Division of Agriculture, said that in cotton especially, pressure from plant bugs has been relatively low throughout the 2016 growing season — but the intensity of this summer’s heat will likely change all that.

“The hot, dry weather we’re experiencing right now is very conducive to caterpillar pests, spider mites, those kind of problems,” Lorenz said. “And sure enough, we’ve got a really big boll worm flight that’s been kind of a rolling population for the last several weeks. And it doesn’t look like it’s going to let up any time soon.

Lorenz said growers have begun to see increasing insect pressure in soybeans for the past week or two, and that it is now intensifying.

“With the temperatures and the weather situation we’ve got, I can’t help but feel like the caterpillar-type pests are just going to get worse and worse. We’re beginning to see loopers moving in on soybeans in the south part of the state — that’s another bad sign,” he said. “The number of fields being treated increases every day, for corn earworm and fall armyworm.”

Lorenz said the mild winter that preceded the growing season contributed to the intense insect populations Arkansas growers are beginning to see.

Bob Scott, extension weed scientist with the Division of Agriculture, said that weed pressure, at least, is not unusually high in the state this year.

“We’ve had an excellent rice and corn year, and cotton has been really clean,” Scott said. “From a harvest standpoint, coming down the stretch, I think we’ve got pretty clean crops, by and large. I don’t expect any problems at harvest.”

Scott estimated, however, that due to PPO-resistant Palmer amaranth (commonly referred to as pigweed) and other aggressive factors, about 20 percent of soybeans in the state will need additional herbicide applications going into harvest.

“As always, with our early-planted beans and our corn, a big recommendation we make is to be sure and not let anything come up post-harvest,” Scott said. “We recommend post-harvest weed control for the soil seed bank, especially with Palmer amaranth.”