By Ryan McGeeney
U of A System Division of Agriculture
July 22, 2016

LITTLE ROCK — As the mercury continues to rise, Arkansas rice growers are crossing their fingers in hopes of an uneventful harvest. 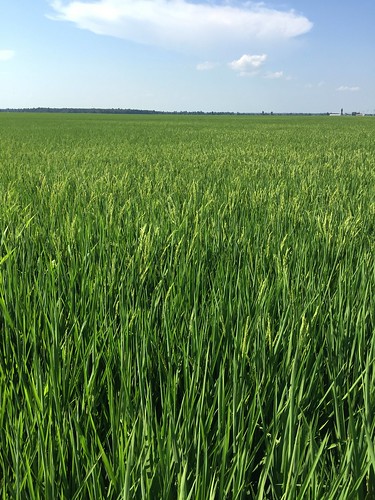 According to a U.S. Department of Agriculture report published Monday, approximately 34 percent of rice planted in the state had headed — more than a 50 percent increase over the five-year average for mid-July crop progress in Arkansas. Jarrod Hardke, extension rice agronomist for the University of Arkansas System Division of Agriculture, said that by week’s end, as much as 70 percent of the crop will likely have headed.

“With this kind of heat, there’s no doubt that we’re going to stay on track for that,” Hardke said. “The vast majority of the crop is moving into heading this week, if they’re not already there. But obviously, the temperatures are going to start to be a concern right now.”

High temperatures throughout Arkansas have reached into the 90’s every day in July, according to data from the National Weather Service. As of Thursday, the entire state was under a heat advisory, with preliminary NWS models indicating a possible high heat indexes, which take into account both heat and humidity, of 110.

“When you start hitting 100 degrees or above, you start running the risk of blanking, where pollination won’t be successful,” Hardke said. “You’ll end up with blank, unfilled grains, with no potential to recover — portions of that field are just lost.”

Craig Allen, Poinsett County Cooperative Extension Service chair, said high temperatures and humidity in mid-July and August were par for the course in his county, which leads the state in rice production. Along with the weather, a certain amount of yield loss due to blanking was something growers learned to live with, he said.

“We get this every year,” Allen said. “Sometimes it’s a week early, or a week late, as far as when the rice starts to head and gets that grain fill. When it’s starting to grain fill, the increased respiration at night causes the plant to consume more carbohydrates, and reduces its ability to photosynthesize during the day, which gives you chalky rice.

“We deal with it every year — it’s just a toss of the dice, whether it hits when the majority of the rice is trying to fill out,” he said.

Hardke said there was nothing growers could do to specifically deal with the heat’s effects on the rice crop.

“It’s a matter of timing and environment, and not a lot of anything we can do,” Hardke said. “Certainly, overall good health and cultural management is going to make the plant better able to withstand any outside stress. But once you pass a certain threshold, the plant loses the ability to successfully pollinate. So there’s not a lot of coming back for it if the timing is just wrong.”

Hardke said water availability may also affect some rice growers in the state who rely on surface waters, rather than aquifers.

“There are plenty of growers who rely on above-ground irrigation for water,” Hardke said. “If they really have a finite water supply to try to keep up with this crop, and with the lack of rainfall we’ve had, up and down the state for most of the summer, that situation is about to get very serious.

“It’s already getting pretty questionable for some people, whether they’ll have enough to make it all the way to the end, and if it gets even hotter, and there’s no more rainfall, then it could get very serious, very quick,” he said.

Hardke said that rice is typically ready to harvest within 35 days of heading.