By Fred Miller
U of A System Division of Agriculture
July 8, 2016 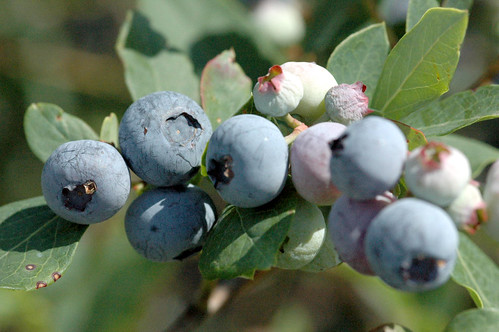 Moore founded the division’s fruit breeding program in 1964 and began crossbreeding blueberries in the 1970s. That work led to the release of “Ozarkblue” in 1996 and “Summit” in 1999. “Norman” was officially released in late 2015.

“Before leaving home for college, Dr. Moore was widely known as ‘Norman,’” Clark said. “In college and ever after, he became known as ‘James’ or ‘Jim,’ but he told me he always liked ‘Norman.’”

The new blueberry is a southern highbush variety with semi-upright plants and good vigor, Clark said. The berries average about 1.7 to just over 2 grams from plants grown in test plots at the Fruit Research Station at Clarksville. They have excellent color and flavor and are firm, making them suitable for commercial fruit shipping operations as well as local fresh markets, including on-farm and farmers markets.

Yield is comparable to “Ozarkblue” and “Summit,” Clark said, and “Norman” ripens in mid-June, about 8 days before “Ozarkblue.”

“This is a high quality berry for Arkansas growers,” Clark said, adding that “Norman” is well adapted to growing conditions in all parts of the state, and especially in central and southern areas.

Clark said “Norman” begins bud swell early, which may make it susceptible to late winter freeze and spring frost damage to developing buds or flowers in some years. He said this was because “Norman” has lower chilling requirement than “Ozarkblue.” But in most years, Norman has been very productive at the Fruit Research Station near Clarksville.

“Norman” will be available from North American Plants, Inc., to licensed nurseries in the fall, said Cheryl Nimmo, fiscal support analyst for the Division of Agriculture.

Information about Division of Agriculture blueberry, blackberry, grape, peach and nectarine varieties, including lists of licensed propagators, is available online: