By Mary Alice Cole
U of A System Division of Agriculture
July 8, 2016

LITTLE ROCK – The July 12-15 Arkansas 4-H State Horse is a time when about 125 4-H members from all across Arkansas compete in more than four dozen events, such as halter classes where the horse’s conformation is judged, and speed events such as pole bending.

This year’s show is being held again at the White County Fairgrounds in Searcy and there are many activities to participate in both in and out of the arena. Competitors at the state show will be eligible to attend the Southern Regional Horse Show at Perry, Georgia. The Southern Regional Horse Show is a very large show – drawing competitors from 13 states. 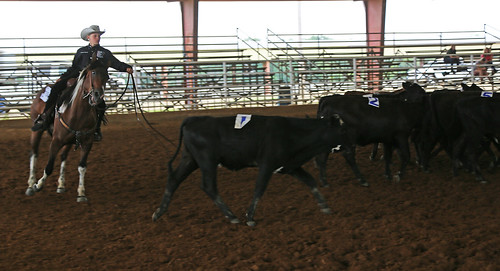 From queen to ambassador

In years past, the state show featured the Queen’s Contest. Competitors were required to write speeches about how 4-H and their horse projects made a defining difference in their lives. Contestants presented their speeches in front of a panel of judges and then the judges asked the contestants questions about their horses and how they cared for them. Following the judging panel, the 4-her’s mounted their horses and rode a reining pattern in the arena. The individuals are judged on their interview, riding ability, and appearance. Then the scores were tallied and the new queens were crowned.

This year, the contest is being called 4-H Horse Program Ambassador. Contestants will still be judged on their interview, presentation and riding ability, but appearance will no longer be part of the score. The winner of the Junior and the Senior division of this contest will be involved in Arkansas 4-H in other project areas and at different functions across the state throughout their year’s term.

The changes will enable “this program to be able to get more 4-Her’s involved in 4-H,” said Mark Russell, assistant professor-equine for the University of Arkansas System Division of Agriculture.

Don’t have to be in the saddle

A horse is not required to be a Arkansas State Horse Show contestant. There are team events such as Hippology, where teams are challenged on their knowledge of all things equine. A moderator asks questions and the first team to answer the question correctly gets a point. There are also individual contests, including public speaking on any number of equine topics.

Competitors qualify for the state show by competing in one of four district shows.

For more information about the 4-H equine program visit www.uaex.edu or contact your county extension office.