By Ryan McGeeney
U of A System Division of Agriculture
Jan. 26, 2018 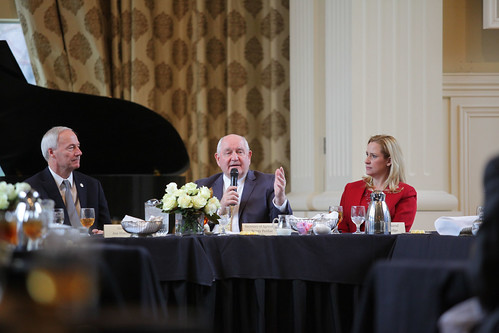 “He gave a huge shout out to extension and research and the land grant mission,” said Vic Ford, associate director-Agriculture and Natural Resources. “If other industries had the research and extension backing like agriculture, they would be as competitive on a global market as agriculture.  The key is integrating research findings with educational programs that make a difference in peoples’ lives.”

The land grant system dates back to Abraham Lincoln, who saw the system as essential to disseminating new technologies to rural areas. As governor of Georgia, Perdue was an ardent supporter of land grant universities. The U of A System Division of Agriculture delivers the research and extension land grant mission in Arkansas.

Perdue visited central Arkansas last week, meeting with elected officials and agriculture industry professionals at the Arkansas Governor’s Mansion, as well as visiting a nearby farm near England, Arkansas.

The visit began with the roundtable, as Perdue, flanked by Gov. Asa Hutchinson and Arkansas Attorney General Leslie Rutledge, fielded questions and concerns from about a dozen farmers, conservation district representatives, and other agricultural industry professionals.

Perdue said he was employing an approach of “listen more, talk less” during each of his visits to a series of agricultural states including Arkansas.

Abraham Carpenter, owner of Carpenter’s Produce Farm near Grady, Arkansas, began the roundtable discussion, urging Perdue to help raise the limit on certain operating and ownership loans available to farmers through the U.S. Department of Agriculture, which are currently capped at $300,000.

“That’s been the limit for about 20 years,” Carpenter said. “As you know, the cost of production has doubled, tripled, maybe even quadrupled. I’d ask that you consider raising that to $600,000, and I think that would probably be adequate for all our farmers.”

Carpenter also voiced concerns that the USDA may be reducing services available to farmers under the Trump administration by reducing the number of positions and outposts at the National Resources Conservation Service, Farm Service Agency and other federal agencies.

Perdue said streamlining efforts within the USDA, announced in May of 2017, would not reduce services available to farmers.

“What we’re doing is simply co-locating many of those services,” Perdue said, explaining that some NRCS or FSA offices in shared regions may relocate to shared locations.

Perdue said his philosophy toward modernizing the USDA, and the various agencies that fall under its umbrella, was one of intent moderated by open-mindedness.

“Be decisive in where you want to go, but leave the door open to a better idea,” he said.

During a short press conference following the luncheon, Perdue said he had tried to impress upon President Trump the importance of the North American Free Trade Agreement, NAFTA, to U.S. farmers, even as Trump has repeatedly made overtures toward “renegotiating” the agreement, which was enacted in 1994.

“NAFTA is very important to American agriculture.” Perdue said. “We know that through the Mid-South, the Mexican market takes a lot of rice, a lot of cotton, pork and other things. Mexico and Canada are the No. 1 and No. 2 export destinations for American farmers.

“The president is hearing that universally, and I think is taking into consideration what that means,” he said. “His responsibility, obviously, covers the whole U.S. economy.”

To learn about farming in Arkansas, contact your local Cooperative Extension Service agent or visit www.uaex.edu.