By Ryan McGeeney
U of A System Division of Agriculture
Jan. 19, 2018

LITTLE ROCK – The Discovery Farms project, which began in Arkansas about eight years ago, will expand to Phillips County in 2018, collecting data and testing conservation recommendations on its first farm in close proximity to the Mississippi River. 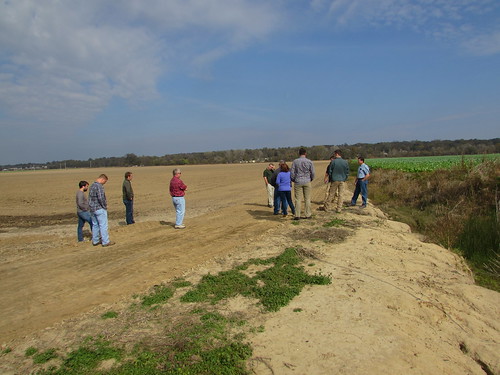 Mike Daniels, extension water quality and nutrient management specialist for the University of Arkansas System Division of Agriculture, said the program will now include a farm operated by producers Mike Taylor and his son, Michael Taylor.

The Discovery Farms project began in Wisconsin in 2008. Through use of edge-of-field monitoring and other monitoring techniques, scientists analyze water runoff to determine the amount of nutrients being lost in the growing process. Experts then make recommendations to the growers, regarding the application of fertilizers and the amount of water used in crop irrigation, and continue to monitor runoff to study how the recommendations affect the process.

After visiting several existing Discovery Farms in Wisconsin, Daniels helped secure funding for the first Arkansas Discovery Farms in 2010. With the addition of the Phillips County location, there are currently 11 active Discovery Farms in Arkansas. Some farms that have been part of the project in the past have since been “graduated out” of the program, and other new farms introduced.

Daniels said that not only will adding the Taylors’ farm to the state’s project help give a clearer picture of farming and soil conditions in the Delta in Arkansas, it will also provide a chance to study the effectiveness of using cover crops and a not-till approach to the fallow season on reducing nutrient waste, as the Taylors have long been proponents of both.

“Mike has been a leader in our state using no-till and cover crops,” Daniels said. “He was one of the earliest adopters; he’s had continuous cover crops and no-till for 12-15 years on some of his fields. We think we can learn a lot from him about how cover crops are playing a role in water quality.”

Daniels said his team of researchers try to find three to four locations on each participating farm to monitor water quality in active fields, initially establishing baseline data for the presence of nutrients that are likely flowing off-target.

“These are emotional issues,” Daniels said. “But when you can give data to a farmer on his farm that either shows him something he needs to correct, or verifies that what he’s doing is good stewardship, that’s powerful stuff for that farmer. It naturally invites him t become an educator of his neighbor farms… many of these farmers will speak at state, regional and national conferences. And the Discovery Farms project also provides a tremendous educational platform for farmers’ involvement in solutions. I don’t think I can overstate how important that is to this program.”

Daniels estimates it costs about $70,000 in initial equipment investment for each farm participating in the program, and about $30,000 for sample collection and analysis per farm each year thereafter. The vast majority of the funding comes in the forms of grants and donations from a wide range of partners, including the federal Natural Resources Conservation Service, the Arkansas Natural Resources Commission, the Arkansas Association of Conservation Districts and others.

Daniels said the project will soon begin taking a closer look at soil health, in addition to studying water quality and quantity associated with farms in the program. He said that the program recently received more than $900 in grants from the NRCS, which will be used to study soil health, including the establishment of “satellite demonstration” plots throughout Arkansas’s Delta District.