By Ryan McGeeney
U of A System Division of Agriculture
Jan. 10, 2018

LITTLE ROCK – As temperatures across Arkansas muddled about at or below freezing much of the last two weeks, one could almost hear entomologists throughout the region raising a glass to the seasonal demise of the red banded stink bug. 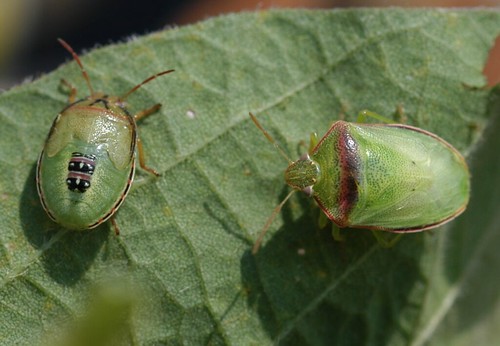 While Arkansas growers must deal with a litany of pests, both native and invasive, nearly every growing season, the red banded stink bug made a notable impression during the 2017 growing season, especially for soybean producers.

Gus Lorenz, extension entomologist with the University of Arkansas System Division of Agriculture, said the insect, which is native to subtropical climates of Central America, typically migrates north through Texas and Louisiana with the rising temperatures of spring and summer. But while they are typically beaten back during winter freezes, two relatively mild winters in a row for Arkansas allowed red banded stink bugs to overwinter in the state, giving them a head-start in the spring of 2017.

“We frankly haven’t had much acreage for red banded stink bugs in the last four to five years,” Lorenz said. “So these two mild winters we’ve had in a row have had a huge impact. They were extremely problematic for growers, especially in the southern part of the state, who typically made from one to four additional pesticide applications to get them under control, costing an additional $12-$60 an acre.”

During the last week of 2017, overnight lows began dipping into the teens, and daytime highs gradually crept lower and lower as well. Nick Bateman, Assistant Professor of Entomology for the Division of Agriculture, said that at sustained temperatures of 33-40 degrees, 90 percent of a given stink bug population will die off after seven hours. At 32 degrees or below, 95 percent will die off after seven days.

“Whether the red banded stink bug population will zero out completely in Arkansas, we’ll be able to determine in the spring,” Bateman said. “But right now, it seems like the central and northern half of the state is probably going to be in pretty good shape.

Bateman said the cold temperatures will also be helpful to Arkansas growers in terms of dealing with more common pests in the state.

“A lot of the insect pests we deal with are weather-sensitive,” he said. “Fall armyworms, rice water weevil and other pests that traditionally migrate — this will help push them back out of the state, rather than overwintering here. It’ll take them a longer time to migrate back into the state.”

The cold can also impact beneficial insects, Lorenz said, including nabbits, lady beetles and parasitic wasps. But beneficial insects are more likely to be native to a given area, and the low temperatures will be a net positive for growers in the state, he said.

Lorenz said that while beating back the red banded stink bug may be welcome news, growers should still be ready to do the work necessary to put themselves in the best position for success in 2018.

“As we go into the 2018 season, the things that growers can do to take full advantage of this weather are the same things we would normally tell them to do to avoid pests, including planting early and using early-maturing varieties,” Lorenz said. “If you plant early, you avoid a lot of these pests.”