By Mark Scott
U of A System Division of Agriculture

LITTLE ROCK – As hundreds gathered Sunday to celebrate the life of Sen.  Dale Bumpers, agricultural leaders in Arkansas are remembering his monumental contributions to the state’s top industry and his passion for serving the state’s agriculture community. His commitment to agriculture previously led to the naming of the Bumpers College of Agricultural, Food and Life Sciences in his honor on the University of Arkansas campus in Fayetteville, along with the Dale Bumpers National Rice Research Facility and the Dale Bumpers Small Farms Research Center in eastern Arkansas.

“As you look at the elected leaders who have been a part of shaping our state’s history, Dale Bumpers stands out as one who made an extraordinary effort to not only preserve, but develop and expand upon the agriculture industry in Arkansas,” said Mark Cochran, vice president for the University of Arkansas System Division of Agriculture. “He is known for many positive things, but we will always know him as the ‘Agriculture Senator’ for his deeply-held convictions for farmers, growers, and rural communities in his state.”

Sen. Bumpers, a native of Charleston, Arkansas., died Jan. 1. His funeral was Jan. 10 in Little Rock. 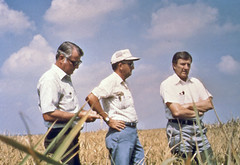 During his 24 years in the U.S. Senate, Bumpers played a major role to bring Arkansas agriculture into national and international prominence. He helped secure more than $80 million in funds for agriculture – aimed at creating facilities and programs that directly benefitted the state – while serving as chairman of the Agricultural Appropriations Subcommittee. Among the projects that benefitted from federal funds during his tenure in the Senate are:

Recognized throughout the state for his strong commitment to agriculture – from research to growing and farming – Bumpers was humbled when the University of Arkansas System Board of Trustees voted to name the College of Agricultural, Food and Life Sciences in his honor in 1995, a tribute to the senator’s passion for agriculture. “In my years of public service I have been honored many times in many ways,” he said at that time. “Other than the honor of being elected governor and senator by the people of Arkansas, this is easily the highest honor ever bestowed upon me.”

Chuck Culver, a former member of Bumpers’ staff who now serves as the director of external relations for the Division of Agriculture, said the senator’s love for his home state and especially farm-dependent rural communities was at the forefront of Bumpers’ passion for service.

“He was a Depression-era youth who grew up in small-town Arkansas dependent on agriculture,” Culver said. “He later married into a farming family and even raised cows himself until he ran for Governor. Food security and protecting farmers were major considerations for him. I’m sure some of this is an outgrowth of living FDR’s New Deal, which influenced him his entire life.”

Bumpers’ dedication to agriculture and rural Arkansas was well known in Washington D.C., having never lost sight of his Arkansas roots. On his final day in the Senate, Bumpers was honored by many of his colleagues, although the words of Senator Robert Byrd stand out:

“Dale Bumpers has represented the rural heart of America,” Byrd said. “In particular, we owe our gratitude to him for his efforts to initiate programs to help young Americans become the nation’s next generation of family farmers, a dwindling breed at risk of extinction … It is with regret that I bid farewell to my friend and colleague, who is now departing the United States Senate. As I say my farewell to Dale Bumpers, I want him to know that when the [next] Congress convenes, I will remember his thoughtful recital of the fictional Atticus Finch in ‘To Kill a Mockingbird’: ‘For God’s sake, do your duty’.”

“Senator Bumpers considered preserving and expanding the agricultural stability of Arkansas among his top priorities,” added Culver. “A day didn’t go by when the Senator didn’t remember or reflect upon his rural background and the farmers back home who sacrificed their own livelihoods to make sure our country was properly cared for. He understood the importance of agriculture perhaps better than anyone who has ever served in the Senate and he certainly spent his time in the Senate to advance the agriculture industry. We should all be forever grateful for that.”

The University of Arkansas Division of Agriculture makes a positive impact for that key industry through the research done by the Arkansas Agricultural Experiment Station and the teaching done by the Cooperative Extension Service. Its mission is to advance the stewardship of natural resources and the environment, cultivate the improvement of agriculture and agribusiness, develop leadership skills and productive citizenship among youth and adults, enhance economic security and financial responsibility among the citizens of the state, ensure a safe, nutritious food supply, improve the quality of life in communities across Arkansas, and strengthen Arkansas families. You'll find the Division in all 75 Arkansas counties, on five university campuses, at five research and extension centers and at eight branch experiment stations.