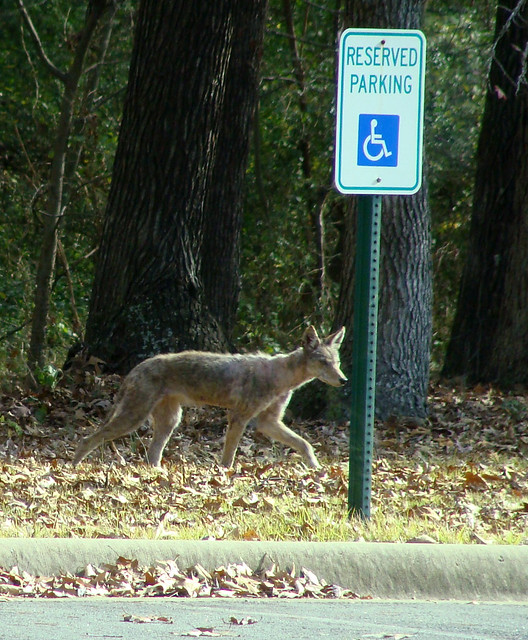 URBAN COYOTE -- Coyote trots along the edge of a parking lot in the middle of Little Rock in this 2011 file photo. (U of Arkansas System Division of Agriculture photo by Mary Hightower)

LITTLE ROCK – We love to watch wildlife. According to U.S. Census Bureau, 96 percent of Arkansans love watching, feeding or photographing wildlife near our homes. However cute or compelling these animals may be, they should never be considered pets, said Becky McPeake, extension wildlife specialist for the University of Arkansas System Division of Agriculture.

A recent opinion piece that appeared at CNN.com with the headline “Please Don’t Feed the Bears” touched on this point. (See: http://www.cnn.com/2013/12/05/opinion/sterba-wildlife-intrusion/index.html?iid=article_sidebar)

“It’s easy to take that step from ‘awww, isn’t that cute?’ to thinking about these creatures as pets, especially when one sees them every day,” she said. “We think we are building a bond with them by feeding them or when they seem to lose their fear of humans and inch ever closer.

“The truth is, these are wild animals, not domestic ones, and making them lose their fear of humans puts them at risk,” McPeake said.

Sometimes the closeness of wildlife can be a nuisance. They take up residence in our chimneys and attics, nibble our cherished gardens to stumps and rend lawns with holes.

On the other hand, wildlife too close can present dangers to humans too, she said. Bears, coyotes and other animals seeking food from near human homes can attack humans or pets. Many wild animals carry diseases such as rabies, Hansen’s disease, better known as leprosy; as well as histoplasmosis, tick-borne illnesses and West Nile Virus.

On Arkansas roadways, deer-vehicle strikes happen at a rate of 18,000 a year, McPeake said, causing some $35 million in damage.

While development and human encroachment of wildlife habitat has been blamed for many negative encounters with wildlife, in many cases, the populations of these animals has grown to many times their pre-1950s levels. For example, white-tailed deer populations grew from about a half million in 1900 to 12 million between 1960-1990 and up to an estimated 30 million in 2011. Canada geese populations have quintupled from 1.1 million in 1940 to more than 5.7 million in 2007. Wild turkeys grew from 30,000 in 1930 to about 5.6 million in 2002.

When wildlife becomes a nuisance or a threat, McPeake recommends doing some checks before taking any do-it-yourself control steps:

Some of this information can be found at www.uaex.edu/environment-nature/wildlife/dealing-with-wildlife/. Please note that many links to extension publications and other information will be changing this spring as the extension service renovates its site.

If you choose to let a professional take care of the problem, check the nuisance wildlife control operators directory on the Arkansas Game and Fish Commission website, www.agfc.com.

By Mary Hightower
Cooperative Extension Service
U of A System Division of Agriculture.