Education, dedication, loyalty focus of 4-H Day at the Capitol

By Ryan McGeeney
U of A System Division of Agriculture
Feb. 16, 2017

LITTLE ROCK — More than 400 4-H members from throughout Arkansas arrived at the State Capitol Building Thursday morning to hear from Governor Asa Hutchinson and other elected officials before touring the grounds, meeting with some of their respective legislators and attending readings of the 4-H Day resolutions in the House and Senate. 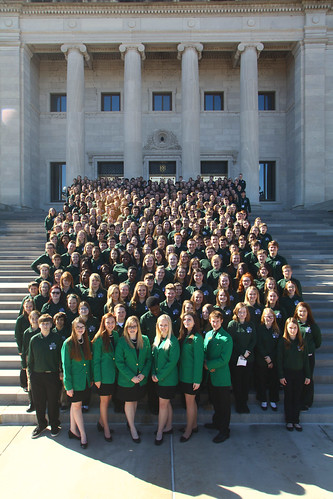 Speaking to the hundreds of 4-H members who assembled a the Arkansas Association of Counties headquarters, State Auditor Andrea Lea said the visit was an opportunity to get a taste of the legislative processes that affect their lives.

“You guys are the future — I know you hear that all the time,” Lea said. “But you are. You’re the ones who will make policy in the future. But you can also make a difference right now, where you are, when you visit your legislators.”

After visiting with Lea, the 4-Hers took the short walk to the state Capitol building to visit with their elected officials and tour the grounds.

The first 4-H Day at the Capitol was held two years ago, in 2015. Brian Helms, director of stakeholder relations for the University of Arkansas System Division of Agriculture, said the purpose of the event was twofold: both to expose members of 4-H to the Capitol and the mechanics of the legislative process, and also to familiarize legislators with the widespread importance and popularity of the 4-H program, which serves all 75 counties in Arkansas.

Lt. Gov Tim Griffin told the crowd that in his life he’s never seen a larger crowd in the rotunda and earned a big  cheer from Columbia County contingent.

Griffin, referring to the Tufts study results included in the Senate resolution and pointing to his own green tie, said “the study shows that folks who wear green … in the long run. are better citizens. They’re more involved in your community. You care what’s going on. The fact that you’re here right now is Exhibit A.”

Referring to the 4-H pledge, State Senator Bruce Maloch told the crowd, “I challenge and encourage each of you to keep that clearer thinking. That greater loyalty and that larger service as 4-H prepares you to not only make a better living but make a better life.”

Gov. Asa Hutchinson, addressing the assembled 4-H members in the Capitol Rotunda, emphasized the importance of the members’ future participation in government and the economy in Arkansas and beyond.

“Arkansas impacts the globe,” Hutchinson, an alumnus of the Benton County 4-H program, said. “We impact the world, and the global marketplace is importance to us. We sell our agriculture all over the world.

For more information on 4-H, contact your county extension office or visit www.uaex.edu.