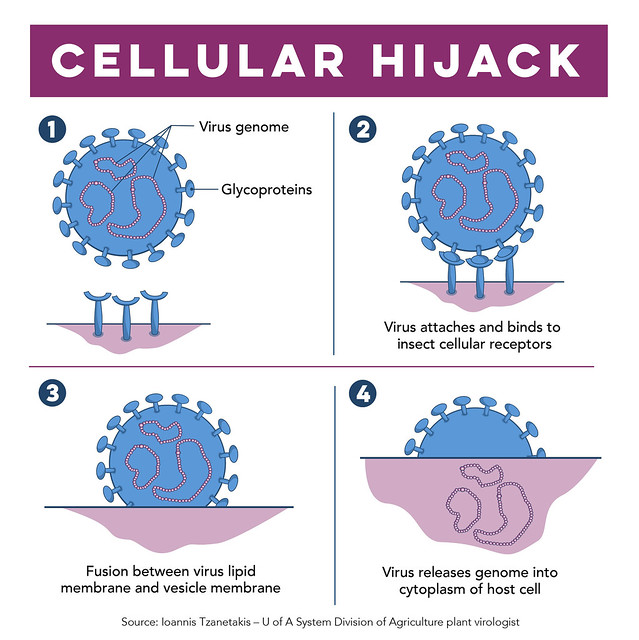 HIJACKED — This simplified depiction of an orthotospovirus entering an insect cell illustrates the process that virologist Ioannis Tzanetakis interrupted by feeding modified peptides to thrips. His research is aimed at interrupting the transmission of the virus that causes soybean vein necrosis to healthy plants. (U of A System Division of Agriculture graphic by Chris Meux)

Virologist Ioannis Tzanetakis and Ph.D. student Jing Zhou employed advanced genetic tools to identify and better understand the transmission of an orthotospovirus that causes vein necrosis and death in soybeans.

“It is the most prevalent virus of soybean in the U.S.,” Tzanetakis said.

Tzanetakis is a professor of plant pathology for the Arkansas Agricultural Experiment Station, the research arm of the University of Arkansas System Division of Agriculture.

Viruses invade living cells of plants or animals and hijack the cells’ reproductive machinery to replicate repeatedly. The reproduced viruses then move to adjacent cells until they infect the majority, if not all, of the cells of a particular organ or organism.

To explore means of controlling the soybean vein necrosis virus, Tzanetakis and Zhou sought a method of minimizing its transmission from infected to uninfected plants.

This virus is unique in that it can use both plants and insects as hosts. In this case, the insect host and vector — or means by which the viruses are transmitted to plants — are thrips, a common insect pest of Arkansas crops.

The researchers wanted to find a way to block or minimize the virus’ transmission during its transit through the thrips. “If you prevent the virus from returning to the thrips’ mouths,” Tzanetakis said, “you interrupt its transmission to plants.”

Thrips ingest the virus when they feed on infected plants. Infectious virus particles, called virions, then move through epithelial cells in the insects’ guts into the insect’s blood, eventually reaching the mouth. When thrips carrying the virus feed on a soybean leaf, the virus is transmitted to the plant.

Tzanetakis and Zhou wanted to see if they could block transmission while virus particles were still in the thrips. They targeted a protein sequence in the virus that was suspected to play a role in attaching virions to receptors on thrips’ cells. They reasoned that introducing certain peptides — protein fragments — into the thrips that could bind to cell receptors and limit virus access to them.

It worked. Virion transmission efficiency was reduced by more than two-thirds.

Because viruses can adapt to overcome something blocking its transmission, Tzanetakis and Zhou then introduced mutations in the peptides to evaluate their effect on transmission.

During this process, they created a multi-mutated peptide, meaning that three amino acids in its sequence were replaced at the same time. It was expected to have minimal effect on limiting virion transmission, but when introduced into the thrips, something unexpected happened. Instead of the virus being able to transmit as if nothing interfered with the process, transmission efficiency dropped drastically.

They think that the multi-mutated peptide can adhere to many different surfaces or trigger a cell response affecting virus adhesion. The implications of this result become very interesting.

“It will take a lot more research to determine what’s going on,” Tzanetakis said. “But the results imply that this may be a generic way to target multiple disease-causing viruses.”

A lot of basic research is required to see if this will work, Tzanetakis said, but what he envisions is a protein sequence that can block several viruses from attaching to cells by blocking receptors with an inert product employing this mutated protein sequence.

“It’s a keylock approach,” Tzanetakis said. “If you already have a key in the lock, the virus can’t get his key in there.”

Tzanetakis is currently seeking funding to investigate the action of this multi-mutated peptide. If successful, and he can define what’s going on and figure out how to employ it in a plant protection strategy, it could lead to new disease control products that target several viruses at once.