(With art available at https://flic.kr/s/aHskRDStPW)

RECTOR, Ark. — Informal surveys of Arkansas growers’ top concerns at the beginning of each planting season typically yield a variety of answers, from the best use of available acreage to marketing strategies for every crop. But for 2019, the consensus among growers attending one of the year’s first row crop production meetings in northeast Arkansas boiled down to one word: Money. 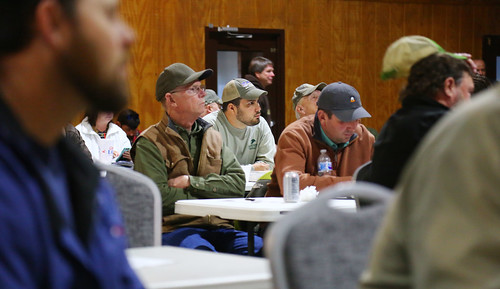 It was literally the first word from the mouth of William Rasberry, a cotton farmer who works about 900 acres just across the Arkansas-Missouri line, in Dunklin County.

“Money,” he said, followed by a long pause. “Mainly money. Is the price going to be there?”

Row crop production in the Mid-South, and agriculture in general, is always a struggle for profitability. But in 2019, growers are looking at a particularly uphill sort of battle, as the cumulative effects of long-depressed commodity prices and an ongoing trade dispute with China are met with the current state of winter fieldwork as yet undone.

The same intermittent wet weather conditions that caused the 2018 harvest to drag on interminably bled from fall into winter, and prevented most growers from completing (or often, even starting) field preparation in January, including fertilization, tillage and leveling. Scott Stiles, extension economist for the University of Arkansas System Division of Agriculture, said that in and of itself will add to growers’ expenses.

“Growers are thinking about everything they have to do, that they couldn’t do last fall,” Stiles said. “There will be a much narrower window to get fields in shape this year, and it’s going to be costly. It’s going to mean more trips across the field, more diesel burned. We didn’t apply fall fertilizer, we didn’t do fall tillage. We really need an opportunity to do some fieldwork this month.”

The “China question” also looms large in the minds of growers and other industry professionals.

Terry Pollard, who grows about 2,200 acres of cotton, corn and soybean east of Piggott, Arkansas, said his top concerns boiled down to “tariffs and prices.”

“There’s a lot of uncertainty right now around the trade discussions with China,” Stiles said. “That’s on the top of growers’ minds at every meeting I’ve been to this month. They’re closely watching those talks. There’s a lot riding on that for soybeans, as well as cotton, corn, wheat — all crops.

“The state of the trade dispute is keeping growers’ plans in a state of flux.” He said. “People aren’t able to decide how they want to shift acres, because so much is riding on the China talks.

The goal was to have at least some of the trade issues with China resolved by March 2. It appears now that the talks will need to extend past that time.”

Due to the partial shutdown of the federal government in December and January, the U.S. agricultural industry was without government data from the U.S. Department of Agriculture and other agencies for more than a month. for 35 days. Growers will be closely watching the release of a major crop report from the U.S. Department of Agriculture today, which has “huge potential to move markets,” Stiles said.

One effect of the ongoing trade dispute with China is the accumulation of soybean stocks, which are now projected to reach record high levels. That may keep soybean prices at depressed levels, and ultimately affect growers’ acreage decisions regarding the state’s No. 1 crop.

“The heavy ending stocks in soybeans are a limiting factor on price, and given that, growers will look at all options,” Stiles said. “A heavy supply such as we have today in the United States, and the world, means prices are going to be fairly subdued until some other fundamental change comes along — a major weather event, or something else that shakes the markets up, the ‘upside’ looks really limited on soybeans.”