By Fred Miller  fmiller@uark.edu
U of A System Division of Agriculture
Feb. 27, 2018

FAYETTEVILLE, Ark. — Travis Faske can catch his breath now that he is immediate past president of the Southern Division of the American Phytopathological Society. 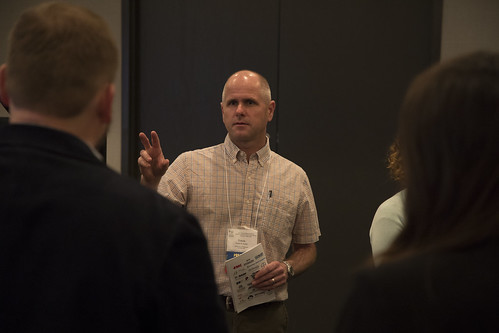 Faske was the society’s president in 2017 and was inducted at the Southern APS meeting in 2017. He said his biggest responsibility was planning the 2018 annual meeting, which was held Feb. 17-18 in Fayetteville. As of that meeting, Faske is now immediate past president.

This year’s meeting was co-hosted by Arkansas and Indiana APS members.

Faske said the APS is an organization of scientists who love plant pathology and offers opportunities to share and collaborate on research. He said APS also focuses on supporting plant pathology students.

“The students are the main driving force of the Southern Division,” Faske said.

He said one of the most important functions of the annual meeting is to give graduate students an opportunity to present their research in a professional meeting. They also have opportunities to meet and learn from plant pathology researchers from across the country.

Faske said the meeting was made possible largely by support from several sponsors. “We would have had to charge members substantially more to attend without their support,” he said.