(Newsrooms: with downloadable images at https://flic.kr/s/aHsktByKyK )

Lancaster, Mississippi County extension agent for the University of Arkansas System Division of Agriculture saw heavy damage to his home at Keiser as an EF-1 twister swept the county.

“I’m very tired and cleanup in this mud is getting to me,” he said Monday. Lancaster rode out the twister storm in his home -- fortunately, “my family was away at a ball game” in Melbourne. 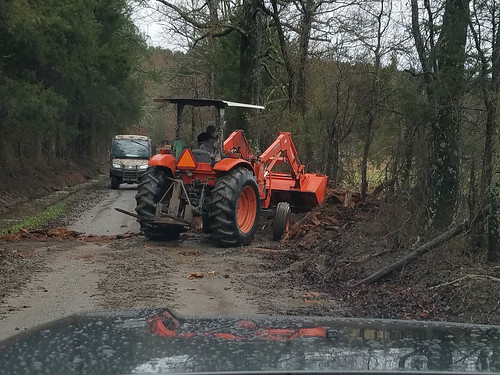 Lancaster said “the only warning was the cat running around like crazy. I got up to check on her and that’s when the windows starting busting and the lights went out.

“The pressure as so tremendous, I staggered trying to get to the safe room,” he said, adding the cat survived, too.

The tornado “blew all the back windows out and I have a lot of water damage on the inside,” he said. “The shop in the backyard was completely leveled.”

Also Monday, Chuck Wilson, director of the Northeast Research and Extension Center at Keiser, got to take a closer look at twister damage. He reported heavy damage to two residences on the property. Fortunately, both were vacant. One building was missing walls on two sides and both sustained heavy roof damage.

“The office back toward town has no power, but everything east of the office – shop, greenhouses, etc., have power,” he said.

Joe Christian, a farmer in Craighead County, posted pictures of his wind-damaged grain bins on Twitter. He said Monday he’d suffered no other storm-related damage from Saturday’s line of storms.

Between Feb. 20-25, parts of Arkansas received up to 10.55 inches of rain. Meteorologist Hayden Nix from KARK-TV in Little Rock calculated the state received 6.7 trillion gallons of water, an amount the National Weather Service called “simply staggering.” By comparison, an Olympic-sized swimming pool holds 660,430 gallons of water.

The Ouachita River at Camden was expected to reach a crest of 41.5 feet by Tuesday, the seventh highest stage on record.

The Ouachita forms the western boundary for timber-heavy Calhoun County, where “many loggers are on hold right now,” said Jaret Rushing, county staff chair for the Division of Agriculture. “I visited with one local logger on Saturday and they have been put on hold until Wednesday at the earliest.

“However, it's looking like we are in the running for another 2 inches of rain or more this week so we might be in trouble there too,” Rushing said. “Right now, in our rural areas, I feel worst for those people with houses in the flood plain. There are residents of the southern part of this county that are boating in and out of their roads – some up to six miles – before they park their boats on the side of a levee/main highway and jump in their trucks to go to work.  It's a way of life, but the inconvenience is immeasurable.”

Another round of heavy rain was forecast for Tuesday night into Wednesday with central and southern Arkansas expecting 2-4 inches of rain, with some severe weather possible, the National Weather Service said on Monday.

In Perry County, Jamie Chambliss, a 4-H leader, posted a Facebook picture of a front loader removing flood-driven debris that had piled up and damaged a fenceline.

Extension Staff Chair Kevin Lawson, said that before the deluge cattle producers had moved their herds to higher ground, feeding them hay as their usual grazing became submerged.

“This is what most of our damage looks like – fence repairs,” he said. “We were fortunate the Arkansas and Fourche LaFave rivers were so low. It would be much worse.”

The mud is causing some heartburn for row crop growers on the verge of growing season, said Robert Goodson, Phillips County extension agent for the Division of Agriculture.

“I have had several phone calls about wheat needing fertilizer and the ground is too wet,” he said. “We are in a waiting mode to see if ground can get dry enough to put fertilizer out by the weekend.”

Goodson said the weather has been really good for weeds and not-so-good for farmers to be able to put out burndown herbicides to preparation for planting.

Information for dealing with natural disasters such as flooding, storm damage and more can be found here: https://www.uaex.edu/environment-nature/disaster/.