By Ryan McGeeney
U of A System Division of Agriculture
Feb. 2, 2018

JONESBORO, Ark. – The Arkansas Soil & Water Education Conference & Irrigation Expo celebrated its 20th anniversary on Wednesday, bringing researchers and experts in the science underlying the health and success of farming in the Southern Plains with growers, consultants and other agriculture industry professionals. 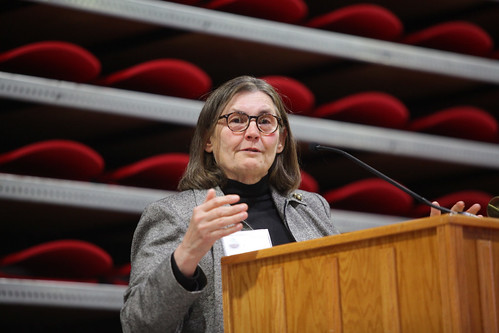 More than a dozen speakers delivered the latest on research into sustainable agriculture, the effects of compaction in Delta soils, data-driven precision agriculture and other topics.

Michele Reba, a research hydrologist with the U.S. Department of Agriculture’s Agricultural Research Service at the Delta Water Management Unit at Arkansas State University in Jonesboro, said the annual conference tends to oscillate its focus one year to the next, from soil to water.

“In my six years with the conference, we continue to push the ideas of innovation in production,” said Reba, who serves on the conference’s steering committee. “We don’t want to sit back on our heels, saying, ‘we know how to do all this stuff, we’re doing it as best as we can.’ Instead of saying that, we’re saying ‘we’re doing things well, but what can we do better?’ How can we manage our resources — sustaining yields, but using less resources?”

The occasion was also marked by the presentation of the conference’s Outstanding Conservationist of the Year award to Tina Grey Teague, the very woman who founded the conference in 1998.

“I was called ‘an entomologist who wouldn’t mind her own business,’” said Teague, who has a joint appointment with Arkansas State University and the University of Arkansas System Division of Agriculture. She said that she founded the first conference, in part, to bring together Cooperative Extension Service agents and researchers with the Natural Resources Conservation Service operating in the same geographical area, as well as provide an opportunity for consultants in the area to earn continuing education credits without having to travel to Little Rock.

The conference also featured a trade show with about 20 participating sponsors, a facet only in its third year at the conference. Teague said the participation of such sponsors has allowed conference organizers to expand the list of invited speakers to include more individuals from outside the immediate region.