By Sara Landis, Center for Excellence for Poultry Science 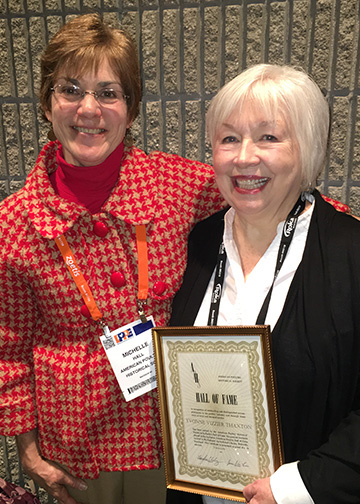 Hall of Fame status is conferred upon not more than five persons every three years. They are selected by a broadly based committee of 30 poultry industry and institutional persons from nominations submitted to the American Poultry Historical Society. The basis for selection is the effect their work and accomplishments have had on the poultry industry of North America.

“I am humbled to be included in this incredible group,” Thaxton said. “This could not have happened without all of the wonderful people that helped me along the way.”

In 1974, Thaxton went to work for Marshall Durbin Food Co. as its laboratory manager, then was promoted to director of laboratory services and later to assistant vice president and vice president of science and quality assurance. While working for Marshall Durbin, she received her Ph.D. degree from Auburn University and served as an adjunct professor in poultry science at Mississippi State University. She eventually became a full-time professor of poultry science at Mississippi State. In 2010 she became professor emerita.

In 2011 she joined the Arkansas faculty as professor and director for the Center for Food Animal Wellbeing. She has also written the Poultry Perspective blog on Meatingplace since 2011, after having served as executive editor of Poultry Magazine, the former sister publication of Meatingplace, from 2001 to 2010.

Thaxton was recognized for giving a career of service to the poultry industry, academia as well to various government agencies. Her expertise is called upon frequently and she has also served many professional organizations, her community and her church.

Thaxton and her late husband Paul Thaxton (inducted in 2010) are the first husband and wife to be inducted into the Poultry Industry Hall of Fame.
The University of Arkansas System Division of Agriculture offers all its Extension and Research programs and services without regard to race, color, sex, gender identity, sexual orientation, national origin, religion, age, disability, marital or veteran status, genetic information, or any other legally protected status, and is an Affirmative Action/Equal Opportunity Employer.