By Mary Hightower
U of A System Division of Agriculture
Dec. 13, 2019 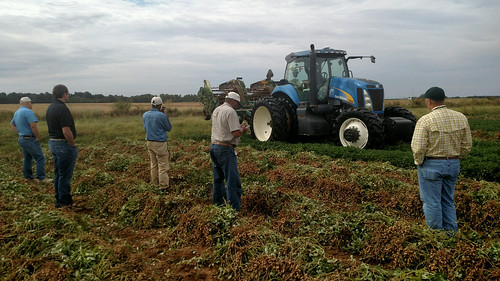 In early November, a mass of arctic air dropped temperatures to record lows in many parts of the state, including areas still soggy from waves of storms. By mid-December, however, growers began to shed their initial fears, as the crop emerged mostly unscathed.

“We were expecting it to be really bad,” said Andy Vangilder, extension peanut educator for the University of Arkansas System Division of Agriculture. “We thought it could be as high as 25 percent, but it turned out to be 10 percent or less.”

“We dodged a bullet,” he said. “It could’ve been much worse.”

While some 5 percent to 10 percent of the crop was still in the field by the second week of December – some of it still uninverted – growers were not going to abandon those, Vangilder said.

Inversion is part of the harvest process. The plants are pulled from the ground and turned upside down, allowing the peanuts to dry and cure.

“Last year, we had several thousand acres in the field that didn’t get harvested,” he said. “I visited with four or five producers this morning (Dec. 9). They’re still going to harvest if they get a break in the weather. They’ve said, ‘If we have dry weather, I think we’ll finish.’”

Arkansas’ peanut acres grew by 10,000 acres in 2019, said Travis Faske, extension plant pathologist for the Division of Agriculture, who served as the Division’s peanut agronomist before Vangilder. According to the U.S. Department of Agriculture, there was a total of 33,000 acres planted in Arkansas.

Faske said that pest management remained a key element of peanut production in Arkansas, with southern blight and late leaf spot being among the most widespread soilborne and foliar disease, respectively, impacting Arkansas peanut production.

A new buying point in Marianna helped spur Arkansas peanut production in 2019; a second buying point near Jonesboro in 2020 is expected to further encourage growth of the crop in the state.

“It’ll be better next year with these facilities in place and help the harvest flow more easily in the future,” Vangilder said.

Vangilder said growers were getting around $400 a ton for their peanuts in 2019. The highest quality peanuts go to making candy bars. Lesser peanuts – those that might have freeze damage, for example – will wind up making peanut oil and livestock feed. Prices for the damaged peanuts were around $150, “which can be devastating to the grower,” Vangilder said.

To learn more about peanut production, call your county extension office or visit www.uaex.edu. Follow the Cooperative Extension Service on Twitter at @UAEX_edu.