By Mary Hightower
U of A System Division of Agriculture
Dec. 13, 2019

FAYETTEVILLE, Ark. – Livestock owners should take extra steps to ensure the integrity of stream buffer zones that become more vulnerable to damage in the winter, said Dirk Philipp, associate professor of animal science for the University of Arkansas System Division of Agriculture. 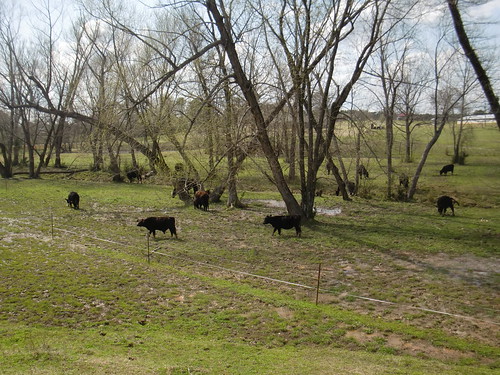 “During warmer weather, buffer zones around streams fulfill important functions as wildlife habitat, filter strips and grazing areas,” Philipp said. However, “During the colder times of the year, riparian areas undergo changes that make them vulnerable to disturbance and traffic.”

In winter, vegetation growth slows to a minimum, which means moisture isn’t taken up by plants, leaving buffer areas wetter. “Little or no growth of vegetation means there is little filtering being done,” he said.

These areas remain important to wildlife, however. The dormant vegetation and any surrounding evergreens, shrubs and understory plants serve as cover and can provide warmth for mammals and birds who may be attracted by fruits and nuts left from late summer and fall, as well as a water source.

Softer streambanks are more vulnerable to damage from hoofs. And since they’re saturated, those areas are also more prone to runoff, which can further accelerate damage.

With these changes occurring during the colder months, Philipp offers pointers on how to adjust a livestock operation to protect these sensitive areas:

“Ideally, manage riparian areas in such a manner that cattle can graze during spring and summer there, but remain on pastures away from these riparian buffers during winter and early spring,” he said.

“Old seeds may still have some good germination rates and can be broadcast cost-effectively,” he said. Overseeding should be done in October or between late February and the middle of March.

Winter is also a great time to relax for a moment, and take in the scenic views.