LITTLE ROCK — A year of weather extremes — from a hard-frozen winter to a summer of drought to seemingly endless rains in the fall — took its toll on both rice and soybean, two of Arkansas’s top crops. Rice, however, emerged from the fray in notably better shape.

“It’s probably been the most problematic year out of the last several,” said Jeremy Ross, extension soybean agronomist for the University of Arkansas System Division of Agriculture. 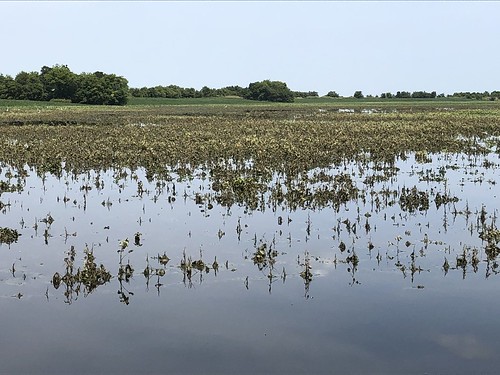 FLOODING – Heavy rains have submerged crops in northeastern Arkansas, including these soybeans. Photo taken west of Burdette, Arkansas. (U of A System Division of Agriculture photo by Jeremy Ross).

Winter gave way to a cold, wet planting season in the spring — a season that was replaced by a hot, dry summer in the blink of an eye.

Soil conditions initially made it difficult for soybean growers to establish stands in some parts of the state. After an abnormally hot and dry May, June and July, significant rainfall in many areas resulted in flooding, especially in Green, Clay and Mississippi counties, among others.

As rains continued in August and September, many of the state’s beans remained in the field, as ground dry enough to maneuver tractors and combines were few and far between. As of Dec. 2, about 94 percent of Arkansas soybean had been harvested, according to the U.S. Department of Agriculture.

“Even trying to finish up, it’s been difficult to get this crop harvested because of the crop conditions,” Ross said.

The longer beans remained in the field, the more quality issues began appearing, with some growers reporting discounts as high as $2.50 a bushel at grain elevators.

The quality discounts moved many growers closer — if not into — the red. While many soybean contracts booked earlier in the year were in the $10 range, Ross said, cash sales rates fell to about $8 at one point in the season, as international trade disputes — most notably, tariffs imposed by China, caused U.S. soybean supply to rise, with few ready buyers in sight.

“With the China market on standstill, we really haven’t had a place to move any significant amounts of soybeans,” Ross said. “We’ve been exporting more to Mexico, and to Argentina, to a lesser degree, but that’s just a drop in the bucket compared to what we typically send to China at this stage of the game, near the end of harvest.”

He said some growers are at the point of storing harvested soybean on their own land, as everything between Arkansas and the Port of New Orleans has come nearly to a halt.

If 2018 offered a bright spot for Arkansas soybean growers, it was that disease and insect pressure were comparatively low. The 2017-2018 winter had spells of freezing weather significant enough to beat back the redbanded stink bug, an invasive insect that had made significant progress into the northern echelon of the state after several mild winters in a row failed to reduce populations of the subtropical pest.

Ross said although there isn’t enough data to suggest how growers will respond in the 2019 growing season, chances are that soybean acreage will likely decrease in favor of other crops, especially cotton, which is enjoying solid sales right now.

“I doubt we’ll drop below 3 million acres, though,” Ross said.

The same seasonal fluctuations that impacted soybean made rice a tough scene for Arkansas growers as well.

“What made it so difficult was, primarily, the cold — followed by the prolonged, extreme heat and drought that ensued from the end of April on,” said Jarrod Hardke, extension rice agronomist for the Division of Agriculture. “It made attempts to establish a permanent floods difficult to, in some cases, nearly impossible — which, in turn, made our weed control extremely difficult.”

Hardke said 2018 was a fairly moderate year, as far as disease and pest pressure in Arkansas rice.

“While it was hot early, and throughout most of the summer, it was so dry that it seemed to keep a lot of our disease issues low, just because we didn’t have the moisture that makes those problems worst,” Hardke said. “The heat didn’t necessarily have a major effect on insect pressure, which was moderate to low at times.”

Arkansas growers ended the year with rice production on about 1.4 million acres, only about 10,000 to 15,000 acres shy of what many agronomists consider “optimum planting.” As with soybeans, the wet fall dragged out the rice harvest.

“There are probably still rice fields out there that haven’t been harvested,” Hardke said. “There always are. But we’ve been effectively done for a while now, although we planted middle of the road, as far as planting dates. So, we weren’t that far behind the five-year average, but we were far behind where we should’ve been, given our planting dates.

While any given year in farming augurs little to nothing for the next, Hardke said that strong prices in rice and continually depressed soybean prices may push Arkansas rice acreage to optimum levels, and possibly beyond.

“If we continue to have $8 soybeans, combined with $5-plus rice, we’ll likely see a trend toward 1.6 million acres of rice,” he said.