U of A System Division of Agriculture
@AgNews479

Corn and grain sorghum growers faced cool temperatures and heavy rainfall during the planting months of March and April, said Kelley, who works for the University of Arkansas System Division of Agriculture. 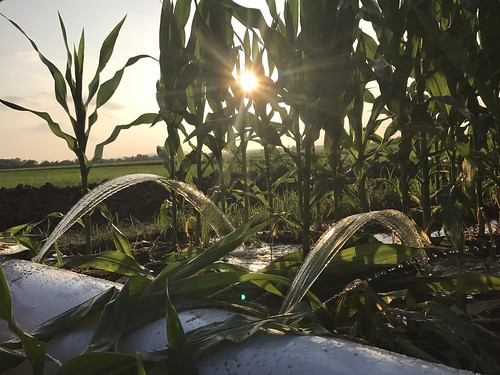 “The crop stand at emergence is important,” he said, “and we saw a lot of variability in the stands — not the kind you want to see for good yields.

“Then the weather turned hot and dry in May, and corn farmers had to irrigate,” Kelley said.

Wet weather returned at harvest time, Kelley said, delaying harvests about a month. “It dragged on a lot longer than most farmers wanted,” he said.

“The highest state average corn yields have all been in the last seven years,” Kelley said.

“That’s a function of good management and taking advantage of favorable weather during the growing season.”

Kelley said Arkansas farmers are currently able to get $3.24 per bushel for grain sorghum at Memphis, an improvement over $2.80 per bushel NASS reports for the average price Arkansas growers received in 2017. “But the price is drastically lower than just a few years ago when China was buying large amounts of grain sorghum,” he said.

“Grain sorghum acres have been up and down with the markets,” Kelley said.

The highest number of grain sorghum acres in the last 15 years was 450,000 acres in 2015, Kelley said. The crop earned a premium price that year, and Arkansas producers responded by planting large acreages.

The grain sorghum acreage in 2017 and 2018 represents the lowest acreage in the state since prior to 1960. Acreage has dropped drastically the last two years as grain prices have fallen considerably compared to 2015, reducing the overall profitability of grain sorghum. The sugarcane aphid, a new insect pest of grain sorghum, has increased production costs, and also reducing profit potential of grain sorghum.

Grain sorghum has some positives, as it is a good rotation crop for soybeans or cotton.  In ongoing research, soybean yields were typically 10 percent higher when planted following grain sorghum than soybeans grown after soybeans, Kelley said.

“Early planting has lots of advantages most years, but getting an adequate stand is key,”   Kelley said.

Kelley said it’s not important to have the first corn or grain sorghum crop in the ground.

“You don’t have to be the earliest one to plant,” Kelley said. “I saw several corn fields that were planted in May that had better yields than March planted corn, simply because of better stands from the May planting.”