JONESBORO, Ark. – If there was anything that seemed to sum up the 2018 production year for U.S. soybean growers, it’s a bar chart extension economist Scott Stiles created showing exports for the week of Nov. 30.

“That’s the stunner,” Stiles, of the University of Arkansas System Division of Agriculture, said. “China has been our No. 1 export market for soybeans since 2002.” 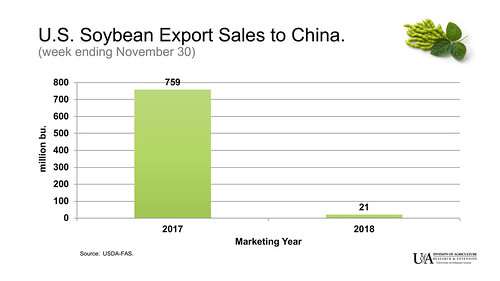 Between the tariff tensions of 2018 and on-and-off rain that seemed timed to keep harvest from being completed, Arkansas farmers found themselves in the rough. A preliminary estimate done by the University of Arkansas System Division of Agriculture placed the damage caused to Arkansas soybeans by the adverse weather at around $77 million.

“The state experienced one of the wettest and prolonged harvests seen in many years,” he said. “This dramatically impacted the quality of the state’s soybean and cotton crop.”

“China, the world’s largest importer of soybeans, added a high import duty this year on U.S. soybeans,” Stiles said. “This has largely prevented U.S. soybeans from entering China. Export movement of U.S. cotton to China is also down compared to a year ago.”

The trade dispute with China has contributed to both an increase in U.S. soybean inventories as well as a substantial decline in prices.

“This has had a negative impact on farmer margins and profitability,” he said. “In addition to trade disruptions, much of the U.S. Corn Belt experienced favorable weather this year and resulting high yields for corn and soybeans. This has further limited any significant price improvement relative to last year.”

Arkansas’ soybean crop was only 94 percent harvested as of Dec. 3, the final National Agricultural Statistics Service Crop Report of 2018. NASS will report its final 2018 crop numbers on Jan. 11.

December did bear some positive news, with reports that China had placed orders more than 1 million tons of U.S. soybeans to be delivered in the first quarter of  2019. However, the good news was tempered by the impending southern hemisphere soybean harvests.

As of Dec. 6, the U.S. Department of Agriculture had classed 89 percent of Arkansas’ 1.16 million bale cotton crop.

“The drop in quality alone this year is due largely to excess rain and has cost growers about $23 an acre, using USDA’s projected state average yield of 1,160 pounds,” he said. “It’s likely additional costs will be incurred getting fields in planting condition for 2019.”

“Trade issues between the U.S. and China are dominating agricultural markets and should continue to do so into the first quarter of 2019,” Stiles said. “Agricultural prices will be pressured until these issues are resolved.

“Of all major row crops, soybeans are most affected by a trade disruption with China. With China buying most of its soybeans from Brazil, U.S. farmers face an oversupply of soybeans,” he said. The U.S. Department of Agriculture was projecting ending stocks to be a record 955 million bushels by the end of the 2018/19 marketing year.

In the most recent USDA Baseline projections released in October, the average producer price for the 2019 soybean crop was projected at $8.75 per bushel. “Growers are currently indicating more interest in corn, cotton and rice in 2019,” Stiles said. “The global stocks of corn and cotton commodities are declining and continued strong global trade outside of China is supporting current price levels.”