(With file art at https://flic.kr/p/NPkdFX )

LITTLE ROCK – Americans selecting Christmas trees for the season’s biggest holiday aren’t only looking at shape and size, according to experts at the University of Arkansas System Division of Agriculture. Longevity counts, too.

“In terms of what lasts the longest, the freshest ones last the longest,” said Tamara Walkingstick, associate director of the Arkansas Forest Resources Center and an extension forester for the Division of Agriculture. “That's why choosing and cutting a live tree can be so rewarding. 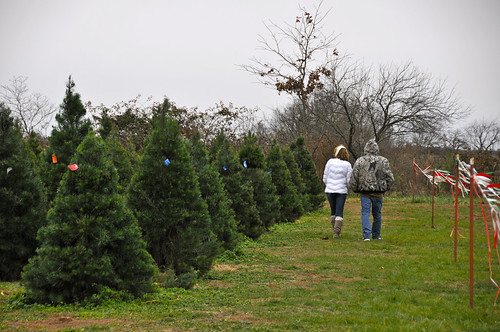 FINDING THE PERFECT TREE - A couple peruses the tree selection at Wonderland Tree Farm in Pea Ridge, Arkansas. (U of A System Division of Agriculture photo by Emily Thompson)

“Some of the species like the Leyland cypress don't readily lose their needles, so that's a plus,” she said. “Some like the Eastern Red Cedar have needles that you find in your carpet in June.”

Walkingstick said that most pre-cut trees have been sprayed with a desiccant to retain freshness.

For many, selecting their own tree is a family holiday tradition. There are many Christmas tree farms that cater to “this experience complete with wagon rides, hot chocolate and the whole works,” she said.

“The other more popular species, such as Fraser fir, don’t grow here,” she said. “We do not have the right soil or growing conditions.”

However, pre-cut Fraser firs are very popular at tree lots and Christmas tree farms that sell pre-cut trees along with choose-and-cut.

“Fraser fir is perhaps the most popular tree in the country and most of what we buy here comes from North Carolina where it is a huge crop,” Walkingstick said. “Some of the other species imported for resale here are noble fir, blue spruce and some white pine.”

According to the National Christmas Tree Growers Association, about a quarter of the Christmas sold in 2017 came from pick-your-own farms and another quarter came from the big lot stores like Lowe's and Walmart.

The most recent information from the U.S. Department of Agriculture shows that in Arkansas, nearly 9,000 trees were harvested and sold as Christmas trees in 2014. The National Christmas Tree Association in its 2017 consumer snapshot, found that:

To lengthen the life of your tree, “Check the water level and  sometimes mist it with water,” Walkingstick said. “However, after a few weeks, it's going to get dry.  When it’s ready to come down, recycle it in your yard or pond, but never, ever burn it in your fire place.”

While some commercials romanticize the idea of heading to the woods with the family to cut a tree down, tie it to their car roof, and drive home, “unless it is their own land, this is really not feasible,” she said. “People cannot cut trees on state or federal land and should not cut on private land without express consent from the owners.”

Looking for a tree? Check out: http://www.arktreegrowers.com/growers.htm.

For more information on trees and forestry, contact your county extension office or visit www.uaex.edu.