By Fred Miller  fmiller@uark.edu
U of A System Division of Agriculture
Dec. 15, 2017 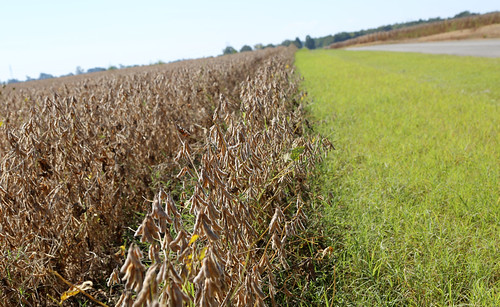 The USDA’s National Agricultural Statistics Service forecasts Arkansas’ soybean harvest will be 175 million bushels, up 20 percent from 145.7 million bushels in 2016.

NASS reports that Arkansas soybean growers averaged 50 bushels an acre, up from 47 bushels per acre in 2016. Arkansas’ average also topped the national average soybean yield of 49.5 bushels per acre, down from 52 bushels last year.

“Several farmers told me they only had to irrigate five or six times,” Ross said. “They typically irrigate 10 or 11 times during growing season, so their watering needs were cut in half.”

The state soybean crop had to overcome some big problems this year. The top issue was off-target Dicamba drift, Ross said.

Most Dicamba symptoms occurred in northeast Arkansas, Ross said, but symptoms occurred in pockets of soybean fields in other areas. The good news was that most off-target problems occurred relatively early and resulted in little permanent damage. But not all growers were so fortunate. In areas where symptoms appeared during flowering, growers saw considerable yield loss.

“We saw yields all over the board because of off-target Dicamba,” Ross said. “Growers reported yields as low as 11 bushels per acre. But others didn’t think they lost any yield even though they had Dicamba symptoms early on.”

A severe outbreak of red-banded stinkbug late in the season damaged some fields, Ross said.

“They became an issue right at the end of the season,” Ross said. “We knew they’d show up, but we didn’t know the population would explode like it did and do the amount of damage we saw.”

The red-banded stinkbugs did a lot of damage largely because of when they showed up, Ross said. By the time the pests were in the fields, a lot of farmers had expended their pest control budgets and elected not to spray.

Ross would like to see a cold winter with several days of freezing to help knock down the stinkbug population. “If we have a mild winter, we’re going to see more trouble from them in 2018,” he said.