By Ryan McGeeney
U of A System Division of Agriculture
Dec. 19, 2016

STUTTGART, Ark. — The University of Arkansas System Division of Agriculture’s specialty rice program, seated in the Rice Research and Extension Center in Stuttgart, is planning to release two varieties of aromatic rice in the coming years, researchers said this month. 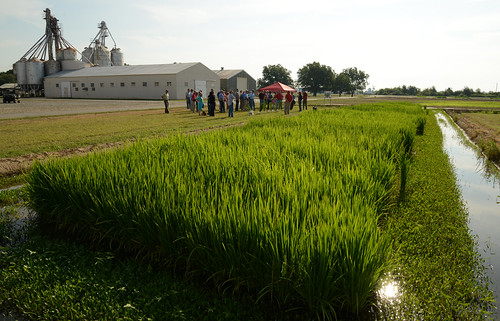 Debra Ahrent Wisdom, a program and research associate for the Division of Agriculture in Stuttgart, said two jasmine-type aromatic rices, currently known simply as AR-1105 and AR-1102, are scheduled to be released in 2017 and 2018, respectively.

“These are really the first lines we’ve released through the specialty rice program,” Ahrent Wisdom said. “We determined there was a demand for these aromatics through conversations with growers, millers and marketers, and also by simply looking at rice imports across the country.”

Ahrent Wisdom said that while the United States (and Arkansas in particular) doesn’t typically import much long- or medium-grain rice, imports of aromatics such as jasmine and basmati are strong.

“There’s an interest among consumers for aromatic rice,” she said, noting that immigrants and foreign nationals, particularly from Asian counties such as India and Thailand,  overwhelmingly prefer the rice grown in their countries of origin.

“We can’t grow the varieties they grow in Thailand and India, because of the photo period sensitivities,” Ahrent Wisdom said. “We can’t just say, ‘send us some seed and we’ll grow it here.’ It doesn’t work that way. There’s something about the environment in Thailand and India that makes those aromatic lines just pop. And it’s not everywhere in those countries — it’s just certain pockets where the soil and the environment just works.

“We don’t happen to have that particular environment here — so we work around the environment we have,” she said.

Ahrent Wisdom said both of the new varieties claim Jazzman, a jasmine aromatic line originally developed by Louisiana State University, as a parent. In three years of test trials, AR-1105 and AR-1102 have averaged yields of 170 and 150 bushels per acre, respectively. While the yields aren’t comparable to most long-grain rice varieties, the numbers represent a strong showing among aromatics, she said.

Jarrod Hardke, extension rice agronomist for the Division of Agriculture, said specialty rices like Ahrent Wisdom’s aromatic lines make up less than 1 percent of overall rice production in Arkansas, the leading rice state in the country. Nevertheless, producers are always looking for an edge in marketing opportunities, he said.

“Our growers do want some investment,” Hardke said. “Any kind of value-added product, anything we can find a fit for, at a premium, and can grow and sell, that’s great. But to date, specialty rice markets are still pretty small.”

Karen Moldenhauer, a professor of Crop, Soil and Environmental Science for the Division of Agriculture in Stuttgart, said the RREC has been working with aromatic varieties for more than a decade, although the specialty didn’t become a focus of the program’s research until Ahrent Wisdom transferred from Fayetteville to Stuttgart in 2009.

“There was a lot of interest in aromatic rice,” Moldenhauer said. “The Arkansas Rice Research and Promotion Board and a number of producers in Arkansas thought it would be good if we could have an aromatic that we could potentially sell to some of these same people; people that were more interested in different types of rices, so they could have something from the United States to choose from.”

Moldenhauer said that since the Division of Agriculture’s rice breeding program was established in 1931, it has released about 45 lines of rice, only one of which has been an aromatic.

Glen Bathke, assistant director of the RREC, said that the specialty rice program’s pursuit of unusual lines provides an avenue for growers to find new markets in which to pursue revenues.

“Just having a new rice variety released periodically lets growers and business owners know that we can grow specialty rice here, not just medium- and long-grain,” Bathke said. “We have aromatic markets right here in Arkansas. If growers would like to participate in that market, we have products that will allow them to do so, and diversify a little bit. But developing those markets is key.”

To learn more about the Division of Agriculture’s specialty rice program, rice breeding program or the Rice Research and Extension Center, visit https://aaes.uark.edu/research-locations/rice-research-station/.