(Newsrooms – with graphs at https://flic.kr/s/aHsmQeew3z)

FAYETTEVILLE, Ark. — Cattle feedlots are beginning to fill again, according to the August Cattle on Feed Report from the U.S. Department of Agriculture. 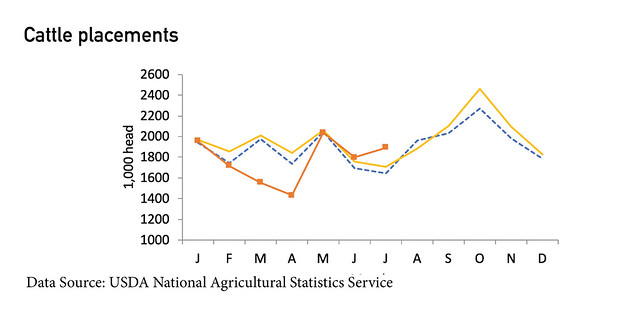 LEVELING UP — USDA statistics indicate beef industry is recovering from effects of spring disruptions in processing. (U of A System Division of Agriculture image)

COVID-19 disruptions in meat processing this spring caused a backlog of cattle at the farm level. The Aug. 24 report from USDA’s National Agricultural Statistics Service showed a restart in the flow of cattle to feedlots.

“The most significant figure in this month’s report was the placements figure. At 1.893 million head, July placements were considerably higher than anybody’s pre-report expectations,” said John Anderson, head of the agricultural economics and agribusiness department of University of Arkansas System Division of Agriculture and the Dale Bumpers College of Agricultural Food and Life Sciences.

“This is the highest July placements figure since 2011,” he said.

The increase can be attributed to a couple of factors.

“First, it suggests that feedlots are trying to refill their pens from the gap in placements that occurred earlier this spring,” he said. “Due to COVID-related disruptions, feedlots have had relatively large inventories of cattle with a relatively long time on feed.”

Anderson said that with a total on-feed inventory at, or even below, the prior year’s level, this suggests a relatively small inventory of newer placements, consistent with the huge drop in placements from February to April. The July placement figure will help feedlots fill in that gap.

Weather is playing a role as well. According to the Aug. 20 Drought Mitigation Center report, about 54 percent of the 48 contiguous states had some level of drought (see: https://droughtmonitor.unl.edu/CurrentMap/StateDroughtMonitor.aspx?conus)

“The July placement figure suggests that dry conditions, which expanded around the country in July, may have forced more cattle off of pasture and into feedlots,” Anderson said. “July is typically at or near the seasonal low in placements. However, dry summer weather can significantly influence placement decisions by affecting forage availability. Dry conditions became considerably more widespread across the Southeast and Midwest over the past month.”

Anderson said that cattle marketings in July were about even with last year.

“With feedlots at least keeping pace with year-ago marketings, the backlog in fed cattle that built up during the disastrous April and May experience has been reduced considerably,” he said.

The calculated number of cattle on feed for more than 120 days as of Aug. 1 is about 9 percent higher than a year ago.

“If progress in August has come close to matching July, the backlog of fed cattle that resulted from COVID disruptions should by now be just about taken care of,” Anderson said. “That should be good news for the cattle market heading into fall.”

Find this analysis and others at https://bit.ly/AR-Ag-Eco-Impacts2020.

To learn about extension and research programs in Arkansas, visit division.uaex.edu, Follow us on Twitter at @AgInArk, @uaex_edu or @ArkAgResearch.