FAYETTEVILLE, Ark. — Hydroponic production of leafy green vegetables is trending upward in the U.S. But the closed, recirculating water systems face some as yet little understood problems with food and plant pathogens, said Ryan Dickson, assistant professor of horticulture for the University of Arkansas System Division of Agriculture. 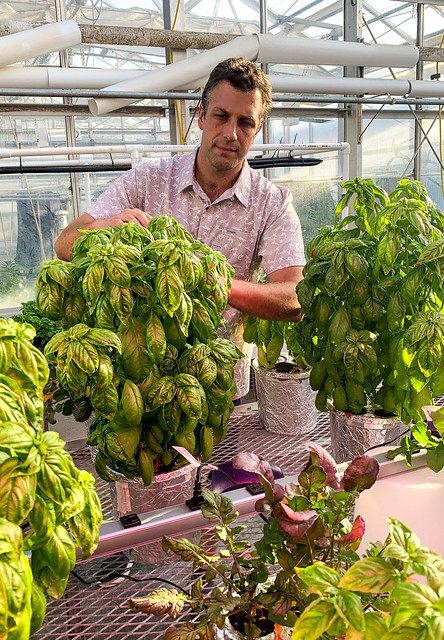 “Every hydroponic grower in the U.S. has had problems with root diseases in summer when heat stress makes the plants more susceptible to pathogens,” Dickson said.

Hydroponic agriculture markets were $8.1 billion in 2019, according to a report by the research and analysis company Markets and Markets. The report projected that market would double to about $16 billion by 2025. The U.S. share of that market is currently at about $2.8 billion.

Dickson has teamed up with Arkansas Agricultural Experiment Station colleagues Kristen Gibson, associate professor of food safety and microbiology, and Alejandro Rojas, assistant professor of plant pathology. They are conducting an integrated research and extension project to investigate the interactions and mechanisms of how pathogens spread in such systems and develop novel solutions for effective management of the problems.

They are attacking the problem in separate pieces that connect like a puzzle into a big picture that will help them outsmart the pathogens.

A $299,608 Critical Agricultural Research and Extension grant from the U.S. Department of Agriculture’s National Institute of Food and Agriculture is funding the project.

His research will focus on Phytophthora and Pythium, two common and damaging pathogens associated with plant diseases. Rojas said he will aim to understand how plant disease pathogens work in hydroponic systems.

“You need to keep the plants in good growing environments with balanced nutrients,” Rojas said. “Too little nitrogen, for example, can cause stress in the plants, making them more susceptible to pathogens. Too much nitrogen can create environments in which pathogens proliferate.”

“We’ll also be looking at micronutrients, like boron, manganese and metals,” Dickson said. “There’s some evidence that boosting micronutrients can boost disease resistance.”

Rojas said he would also be looking at pH levels of the water. Hydroponics operators go to great lengths to maintain the pH at 6, but Rojas and Dickson both think there’s room to adjust the level to suppress pathogens while still maintaining plant health.

“There’s evidence that lower — more acidic — pH can impede pathogens’ ability to infect plants,” Rojas said. “But pH levels can also affect the uptake of micronutrients. Not much is known, yet, how it works in hydroponic systems.”

Most food safety research focuses on commercial processing of foods, Gibson said. “There’s not a lot of information on food safety risks in hydroponic systems.”

Gibson will use Listeria and Tulane virus as her research models to determine how illness-causing pathogens behave in hydroponics.

“Foodborne pathogens are opportunistic,” Gibson said. “They will capitalize on stressed plants.”

“And there does seem to be a higher risk of internalization in leafy greens,” Gibson said. Foodborne pathogens could be taken up by the plants as they take up recirculated water in the system. Internalized food pathogens are difficult to detect and even harder to remove.

“They pose a risk to consumers because, being internal to the plants, they are near impossible to wash off,” Gibson said.

Although regulations require testing source water for hydroponic systems, there are no requirements to test the water in the system, Gibson said. And there are no standard means of measuring pathogen levels in the water.

“It will be important to know when and how to test internal water and what events ought to trigger testing, to detect, track and measure foodborne pathogens,” Gibson said.

After building a base of knowledge on both plant pathogens and food pathogens, the team will examine how these two groups might interact in hydroponic systems.

“Pathogens interact with one another, but there’s not much existing knowledge on interactions between plant pathogens and food safety-related pathogens,” Rojas said. “It’s possible, for example, that root damage from a plant pathogen might create an opportunity for a food pathogen to enter the plant.”

Gibson suggested it was also possible for a food pathogen to be carried into a plant in association with a larger plant pathogen in a sort of Trojan horse action.

“We’ll issue a nationwide call for hydroponics growers to send water samples to us,” Dickson said. “We’ll send out a packet with a kit and instructions for collecting the samples and returning it to us.”

The packet will also include a survey of each participant’s operation and practices.

The samples will be screened for nutrients and pathogens, Dickson said. In return, the growers will receive a report that includes an evaluation of their water samples and practices, and recommendations for best practices to get the best production out of their operations.

Dickson said the team would use the data to develop a nationwide profile of water nutrient and pathogen concentrations.

“We’ll have a benchmark on water quality that can be compared by region throughout the U.S.,” Dickson said.

Taking an interdisciplinary approach, Dickson said, will allow them to pull together a base of knowledge on food and plant pathogens in hydroponics systems and develop novel strategies for decreasing plant diseases and human health risks.

Getting the word out

Hydroponics growers are using many different systems to manage pathogens, Dickson said. “Some completely flush their system periodically,” he said. “Others manage pathogens in the same water by continuously balancing pH and nutrients. And there’s everything in between.”

Education will be an essential part of the program in the long run, Dickson said. “Many hydroponics systems are started by newcomers to agriculture, and they are still early in their horticultural education.”

After developing practical and low-cost management practices based on research, Dickson, Gibson and Rojas want to get the information out to the growers as rapidly as possible.

About the Critical Agricultural Research and Extension grants

This grant is one of 16 CARE grants that will advance solutions to critically important problems in U.S. agriculture, according to an announcement from USDA. These NIFA investments in user-inspired projects bring together researchers, extension experts, and practitioners to find solutions that can be rapidly adopted by the agricultural community. Critical problems impede efficient food and agricultural systems at local, regional, and national scales. Work supported by this federal investment enables partnerships and close coordination across the entire spectrum of food and agriculture on efforts to yield practices that meet pressing needs. These grants are part of NIFA’s Agriculture and Food Research Initiative.