Family and farming have a special connection for Mississippi County agent 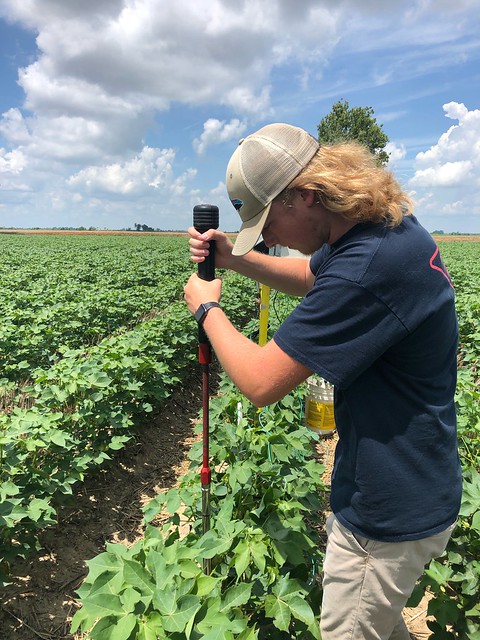 Benson, Mississippi County Cooperative Extension staff chair since 2011, started his journey with the University of Arkansas System Division of Agriculture in the summer of 1987. It was then, when he started working as a cotton scout for an extension integrated pest management project, that he began the journey that would shape the rest of his life.

Benson, a native of Manila, Arkansas, where he grew up on his family's farm, began his career with Wildy Family Farms as a scout, and then a scout supervisor. As a scout supervisor Benson was responsible for working with multiple farms’ scouts, including Wildy’s.

Benson also returned to Wildy Farms to do research while working on his master’s degree. He worked on validation and training of the COTMAN program, a cotton management program developed by the Division of Agriculture, as a part of his master’s thesis, Benson said.

“I started as a scout and moved up to scout supervisor and I met my wife that way,” Ray Benson said. “She was a cotton scout in the county.”

Benson and his wife, Jennifer, have been married for 26 years and have two children, Neal and Jenna. Neal is carrying on the family tradition at the University of Arkansas, where he will soon be starting his second year as a crop science major at the Dale Bumpers College of Agricultural, Food and Life Sciences.

Neal also has ties to Wildy Family Farms, where he recently spent some time helping his father install moisture sensors.

“I’ve been around the Wildys since I was a kid,” Neal Benson said. “They're like family,”

It was not until the elder Benson took a picture of Neal helping him with the sensors that he realized how the long arc of history had brought a new generation around to an old beginning.

“It clicked, that a lot of who I am today is related to this farm,” Ray Benson said. “I started on Wildy's farm, I met my wife there, my thesis research was there and now my son is out there doing sustainability type work. It was a proud moment for me.”