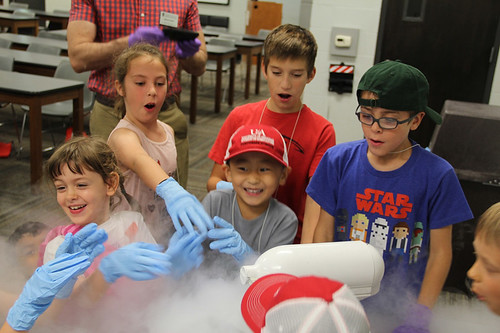 Treats made by dipping food items in liquid nitrogen immediately before serving produce extremely cold vapors. When placed in the mouth, those nitrogen vapors can come out of the nose and mouth. Liquid nitrogen is extremely cold. It hits its boiling point at -324 degrees and changes from a liquid to a gas. This transformation produces possible health risks, including internal and external burns, and internal complications when the gas expands in the stomach.

“Liquid nitrogen is a chemical used in many cooling and cryogenic applications,” said Ya-Jane Wang, professor of carbohydrate chemistry. “It can be used in a variety of food preparations from commercial industry to gourmet restaurants but should never be ingested.”

Wang and Sun-Ok Lee, professor of nutrition, are both food scientists with the University of Arkansas System Division of Agriculture and the U of A’s Dale Bumpers College of Agricultural, Food and Life Sciences.

They offered the students a few warnings, and suggested one alternative:

The summer camp was hosted by Bumpers College’s departments of animal science, food science and horticulture in partnership with the Center for Mathematics and Science Education.

About the Dale Bumpers College of Agricultural, Food and Life Sciences: Bumpers College provides life-changing opportunities to position and prepare graduates who will be leaders in the businesses associated with foods, family, the environment, agriculture, sustainability and human quality of life; and who will be first-choice candidates of employers looking for leaders, innovators, policy makers and entrepreneurs. The college is named for Dale Bumpers, former Arkansas governor and longtime U.S. senator who made the state prominent in national and international agriculture.