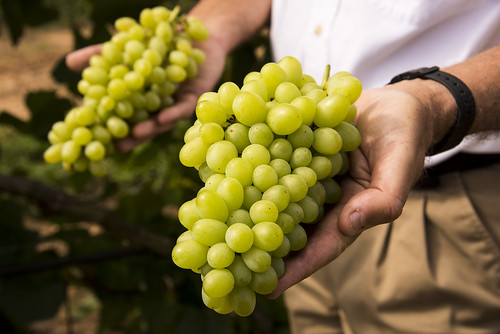 The grape was originally released in 2017 under the name “Passion.” The name was changed to avoid confusion with a fruit variety released under the same name from another institution.

Clark introduces Compassion in a Division of Agriculture video: https://youtu.be/ZY_Qpw8qZRc

The other inspiration table grapes are the red grapes “Faith” and “Joy” and white grapes “Hope” and “Gratitude.”

Clark said “Compassion” was the pinnacle of achievement for an effort begun by James N. Moore, who founded the Division of Agriculture fruit breeding program in 1964.

Moore wanted to develop seedless table grapes that could be grown in Arkansas, Clark said. He wanted to combine the thin-skinned, crispy texture of California grapes with the fruity flavor of eastern grapes. He made crosses to develop Arkansas breeding stock that is used to this day.

“Crisp texture is one of the most outstanding attributes of ‘Compassion,’” Clark said.

The texture comes from its California Vitis viniferaheritage and its skin is non-slipskin and thinner at full maturity than other Arkansas grapes, Clark said.

“The exquisite fruity flavor is from the eastern Vitis labruscaand includes some aspects of muscat from Vitis vinifera,” Clark said.

On a flavor scale used to evaluate selections, Clark said “Compassion” is comparable to “Jupiter,” a popular grape from the division’s breeding program, and rates higher than other Arkansas grapes.

Fruit ripens at the Fruit Research Station near Clarksville from early August into September, Clark said. The average mid-season harvest date was Aug. 22.

The berries are medium-sized, Clark said and are elongated oval in shape. The color is green at maturity and the berries are consistent in color. Clark said he noted that the fruit has reduced green color when exposed to direct sunlight at maturity.

The grape grows in medium-sized clusters that ranged in weight from about half a pound to 1 pound in replicated trials, Clark said. That makes it larger than “Jupiter” in three out of five years and larger than all other Arkansas grapes except “Gratitude” in three-vine plot comparisons.

The clusters are well-filled to tight, which may contribute to fruit rot when berries are closely spaced.

Fruit cracking is usually a problem for grapes in climates with summer rains that occur during fruit maturity. But Clark said “Compassion” usually produced fruit that did not crack even with occasional rain showers near harvest.

Some fruit cracking was seen in evaluations when heavy rains occurred near harvest, he said.

Bud break was six to 10 days later than “Jupiter,” which Clark said is desirable because it can reduce frost damage to developing buds. Vine health is good and consistent year-to-year, even with low winter temperatures, and the plants were observed to have good leaf color, usually with no disease.

Diseases that were occasionally seen were powdery and downy mildew, even when fungicides were applied, Clark said. Fungal diseases are common in grapes grown in humid environments like that in Arkansas.

The University of Arkansas System Division of Agriculture offers all its Extension and Research programs to all eligible persons without regard to race, color, sex, gender identity, sexual orientation, national origin, religion, age, disability, marital or veteran status, genetic information, or any other legally protected status, and is an Affirmative Action/Equal Opportunity Employer.Media Contact: Mary Hightower