FAYETTEVILLE, Ark. — Mississippi County farmer Mike Sullivan is watching his soybeans rot in the field and his rice sprouting in the heads, and there’s nothing he can do about it.

Unusually heavy rains — measuring around 12 inches in August, so far, and up to 10 inches in a single night in parts of some northeast Arkansas counties — hit just as many farmers were gearing up for harvest. Sullivan said his fields have been sitting in water for a week. (See report from National Weather Service's Little Rock office: https://www.weather.gov/lzk/rain0818a.htm )

The northern half of Mississippi County seems to have taken the worst of it. 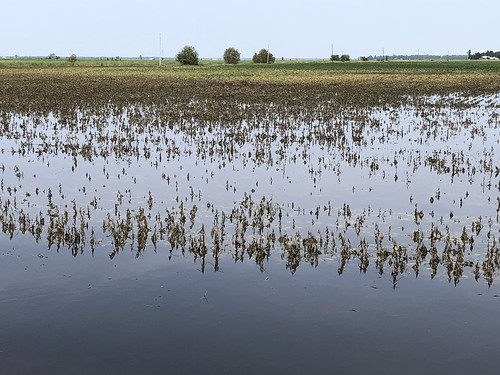 FLOODING – Heavy rains have submerged crops in northeastern Arkansas, including these soybeans, (U of A System Division of Agriculture photo by Jeremy Ross).

“I knew they had a lot of rain,” said Jeremy Ross, extension soybean agronomist for the University of Arkansas System Division of Agriculture. “But I didn’t know they had this much damage until (Mississippi County Extension staff chair) Ray Benson called and asked me to come up here.”

“We’ve literally had water on fields since last Thursday (Aug. 16),” Sullivan said. “We’re ready to cut rice and soybeans and can’t until we can get the water out.”

Sullivan can’t get the water out of his fields because the ditches are all full, he said. Water has broken over the levees in his rice fields, he said, and some of his neighbors even have water in their houses.

It’s the worst Sullivan has witnessed in 35 years farming in Mississippi County. “I’ve never seen anything like this in my lifetime, where the rain all came down at once,” he said.

“Soybeans are experiencing the biggest hit,” Lancaster said. “The beans are sprouting in the pods and a lot of them are rotting. It smells like a sewer pond out here with all the rotting vegetation.”

He said farmers like Sullivan may see significant yield losses to their soybean crops.

Allison Howell, Clay County Extension agriculture agent, said some soybeans, cotton and corn are under water after Clay County had 10 inches of rain in one night followed by 3 inches the next day.

“They’re pumping water out of soybean fields at Knob,” she said.

Ross said the worst loss for soybeans will be in the lower ends of fields where the water is deeper. Higher ground in the fields will see less damage.

“It’s going to be worse in some areas,” Ross said, “There’s not a bean plant standing up in some of those fields.”

“But in most areas,” Ross said, “after pulling some plants and squeezing pods, I think it may not be that bad. Looking across the fields, I expect to see an average of 10 to 15 percent loss.”

“The real test will be to see what the combines tell us when they can get in there,” Ross said.

When the combines can get in is the big question in the worst hit areas. “Some fields are still submerged,” Ross said.

Jarrod Hardke, extension rice agronomist for the Division of Agriculture, said rice is sprouting in the heads in some areas, but it’s not widespread.

High winds accompanying storms caused lodging in scattered fields all over the rice growing areas of the state, Hardke said. Downed rice takes longer to dry and is a real mess to harvest, he said.

The main problem for rice now is the continuing delay of harvest. “Rice growers were ready to roll when the rain hit, and flooded fields have delayed some of them as long as two weeks,” Hardke said. “With water backed up everywhere, there’s no place for it to go.”

“The longer rice is in the field, the more bad things can happen,” Hardke said.

Although rice heads are sprouting in some areas, most Mississippi County rice hasn’t had significant damage, yet, Lancaster said. The rice heads are mostly still above water. But it’s time to drain the fields for harvest.

“You can’t drain the rice because the ditches are full of water,” Lancaster said.

Howell, in Clay County, said most rice growers have begun draining their fields, but it’s taking longer because of all the extra water in the ditches.

“The corn is all mature, but rain has kept it from drying and delayed harvest,” Kelley said.

“The big concern,” he said, “is the longer it’s in the field, the greater the risk of lodging.” If the corn is falling over, he said, “you can’t get it all in the combine.”

Ross also expects some loss of grain quality because the corn is taking so long to dry.