U of A wine grape, Enchantment, now bottled and sold by Arkansas winery
skip to main content

By Ryan McGeeney
U of A System Division of Agriculture
Aug. 17, 2018

CLARKSVILLE, Ark. – After decades of development, a wine grape bred by University of Arkansas System Division of Arkansas experts is now being bottled and sold by one of the oldest wineries in the state. 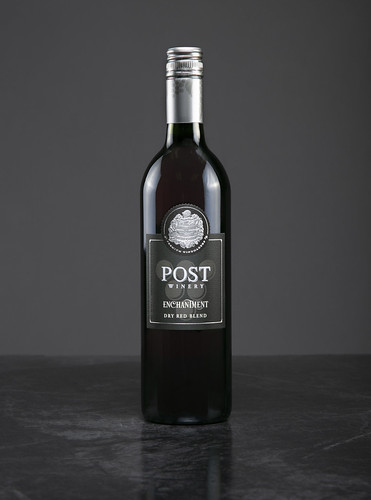 Post Wineries, a family-owned winery located in Altus, Arkansas, began selling Enchantment, a dry red wine containing the grape of the same name, in July. The grape was developed by Division of Agriculture fruit breeder John R. Clark — although he chiefly credits those who preceded him in the Division’s decades-deep efforts to create a durable, marketable regional wine grape.

“Dr. Jim Moore, who started the U of A’s fruit breeding program in ’64, and Food Science faculty member Justin Morris — when I came along in the 1970’s, those were the people you knew about from Arkansas in horticulture. They were national figures in the field,” Clark said.

Clark joined the University of Arkansas in the 1980’s, when wine grape breeding was “more or less a side project” at the Fruit Research Station in Clarksville. Together with Moore, Morris and later research scientist, Renee Threlfall and others, Clark and Threlfall worked to steer a wine grape viable for Arkansas and the region to fruition.

“When you’re breeding a wine grape, yes, you have a flavor profile in mind, based on the style of wine you want,” Clark said. “But from a breeder’s standpoint, you need to make sure the vine survives the winter, and the summer, not rot, make adequate yields year after year, be healthy… so much more than simply what the grape tastes like.

“It’s particularly hard in Arkansas, because we have a harsh climate, compared to somewhere like California,” he said. “That’s part of why it took us so long to do this — to produce a wine grape with the confidence that it will perform year after year.”

Clark said that while wine grape breeding allowed his team to be less concerned with things that typically occupy efforts to breed a table grape, such as berry size and crispness, the pursuit of a great wine grape requires more focus on chemistry analysis.

“Flavor is important, but it’s a different matter from table grapes,” he said. “With a wine grape, you look at a few things, but ultimately it comes down to sugars and acids as well as fruit color and other factors. You don’t look at it like you would a table grape.”

From the mid-1990s to the early 2000’s, Clark, Morris and Threlfall worked to whittle the Fruit Research Station’s collection of approximately 100 wine grape selections down to those with the highest quality vines, and those with the greatest survivability in the region.

In 2002, Morris invited representatives from five Arkansas wineries to Fayetteville to taste wines made from a handful of the remaining selections. Each of the wineries were given the opportunity to test some of those selections, Clark said, including the red grape that would become Enchantment, and a white grape that became known as Opportunity.

Two of the wineries provided the researchers with feedback, Clark said.

“Not everyone was able to follow through on trials, or provide evaluation and comments on the grapes,” he said. “Post was able to provide some good test results from the testing, and that contributed to the release of Enchantment.”

Enchantment vines have been available for purchase from the university for several years now, Clark said. While Post is the first winery to bottle and sell a wine from the grape on a commercial scale, other wineries should follow suit as well.

Tina Post, retail manager and board member at Post Wineries, said the addition of the Enchantment grape has helped the winery broaden its market appeal.

“From a sales and marketing perspective, it is incredible to be able to successfully grow and create a dry red wine that will rival the style of your traditional dry red vinifera wines,” Post said. “It is very exciting to be able to offer the Enchantment in our tasting room here at Post Winery.  It brings another vital dimension in our line to the many styles and varietals we already are able to offer.”

Shane Oiler, winemaker and vineyard manager for Post Wineries, said the Enchantment grape had proved to be a strong contributor to several blends the winery has produced.

“Enchantment is a versatile grape from a winemaking perspective,” Oiler said. “It has wonderful color stability which allows for a wide range of blending uses. It can increase the depth and complexity in red blends or can be used in small amounts to stabilize a rose/blush.

“In our Enchantment label, it serves as the core of the blend and handles similar to a petite syrah,” he said. “It works well with oak chips or staves and would be a great candidate for barrel aging. Enchantment is a testament to the hard work at the U of A, and will assist with the development of the regional wine identity of Arkansas.”

Clark said he hoped to see Enchantment, as well as the breeding program’s white wine grape, Opportunity, meet with some commercial acceptance, as well.

“I’d always like to have Opportunity in this mix also,” he said. “The hope is that both of these varieties would contribute to an expansion and product diversification of adaptive grape vines for Arkansas and other wineries in this region.”