Soybean college focuses on the importance of identification

By Ryan McGeeney
U of A System Division of Agriculture
Aug. 14, 2018

NEWPORT, Ark. — When it comes to the No. 1 crop in Arkansas, the state’s soybean agronomists and other row crop experts have their work cut out for them in their efforts to communicate the latest in research findings, pest management and growing techniques. But the University of Arkansas System Division of Agriculture’s annual Soybean College in Newport, Arkansas has proven to be a powerful and concise way to do just that. 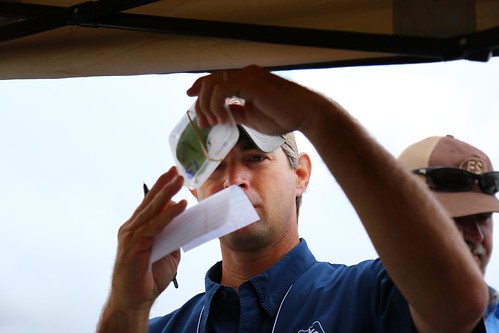 More than 110 growers, consultants and other industry professionals from throughout Arkansas convened last week for the 2018 event, which covered best management practices dealing with diseases, pests, nutrient management an other essential aspects of soybean farming.

Held at the Newport Extension Center, attendees were divided into about six groups, which rotated between education stations located among the many test plots at the station.

A common thread throughout many of the day’s classes was proper identification — be it of pests, diseases or growth and reproductive stages of the plant itself.

“If you just start spraying at the first sign of something that seems abnormal, you can really complicate an already complicated management situation,” said Travis Faske, extension plant pathologist for the University of Arkansas System Division of Agriculture.

While Faske couldn’t cover every disease to which soybeans might fall prey, he said he tried to cover the most common offenders: frogeye leaf spot, target spot and the southern root knot nematode, as well as triazole fungicide and herbicide injury, which may sometimes appear symptomatic of a viral or bacterial disease.

Likewise, extension entomologists Nick Bateman, Ben Thrash and Gus Lorenz worked to impress upon the attendees the importance of scouting crops for insects, and correctly assessing rates of defoliation when dealing with a leaf-gobbling pest.

“When we take people out in the field, we see growers look at a given leaf, and their guesses are all over the map, as far as how much damage is actually present,” Bateman said. “We’ll show them a leaf that we’d assess as about 5-10 percent defoliated, and folks will tell us it’s 50, 75 percent damaged.”

Jeremy Ross, extension soybean agronomist with the Division of Agriculture, said correct identification of growth stages in soybeans was also key to management and a successful harvest.

“That’s key to knowing when it’s legal to apply an herbicide, when it’s no longer economical to irrigate the crop as you approach termination, and everything in between,” Ross said.

Frank Groves, a private sector agronomist based in Little Rock, said Wednesday’s event was his first Soybean College experience. He said he attended the college hoping to expand his knowledge of the crop.

“I have a cotton background, buy I’m in a role now that involves soybeans as well,” Groves said.

“Whenever you go out to a field to look at an issue, seldom is there ever just a single issuer that’s causing a problem,” he said. “It’s usually the piling on of multiple things. I just want to get a better understanding of how to see the early stages of issues, and have a better understanding of what all may be contributing to a problem, and putting it all together.”