NEWPORT, Ark. – Billbugs, once an occasional pest of rice that cannot survive in standing water, are putting increased pressure on crops as row rice acreage rises. 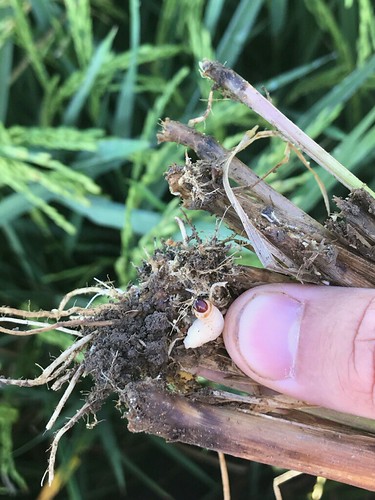 Billbugs are weevils whose larvae bore into the side of rice tillers, or stems, which deprives developing grain heads of nutrients. This leads to “blank heads,” or heads that never developed kernels. Billbugs cannot survive aquatic conditions, making row rice, which does not hold a continuous flood, an ideal environment.

“We’ve been saying for the last few years as row rice becomes more popular, we’re going to have a billbug problem,” said Nick Bateman, extension rice entomologist for the University of Arkansas System Division of Agriculture. “And there have been some reports over the past couple of years, but this is one of the first years we’ve seen, at least in pockets, a substantial number of billbugs.”

Because billbug larvae bore into the side of rice tillers, most damage isn’t seen until it’s too late.

“The damage doesn’t stop the head from forming, but it kills the tiller, so in turn it’s killing that head as it’s trying to push out of the boot,” Bateman said. “Now that rice is mostly headed out, we’re starting to see a lot of blank heads.”

Billbugs tend to stay near the bottom of the plant, making scouting extremely difficult, but there are clues.

“They’re most likely not moving up and down the plant a lot, so we could maybe get down on our hands and knees and scout for them, but that’s just not feasible,” Bateman said. “Similar to rice water weevils, billbugs come out of a tree line. So it’s going to be the high end of the field in row rice or on levees and it’s going to be near a tree line.”

It is still unclear which form of control will be effective, but there are trials in place this year and more planned for the future.  Because there is a period of time between when adults migrate to the field and when damage appears, Bateman is hoping to test timed foliar applications as well as seed treatments.

“We’re exploring seed treatment combinations and we’re hoping there’s some combination that will give us some control,” Bateman said, “We’re also trying to look at whether it’s based on the growth stage of the rice or maybe a calendar event, so that we could maybe time a foliar application.”

The race is on with billbugs in Arkansas. Although infestations aren’t widespread, row rice acreage is increasing and extension entomologists are working on a solution.

For more information on insect control in rice contact your county extension office or visit www.uaex.edu.