By Ryan McGeeney
U of A System Division of Agriculture
Aug. 11, 2017

CLARKSVILLE, Ark. – Researchers with the University of Arkansas System Division of Agriculture’s Fruit Research Station are looking at the potential for an innovative trellis system to increase overall blackberry production in the state. 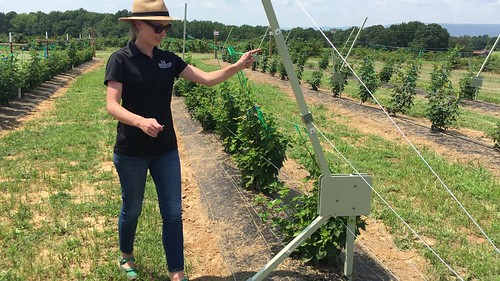 Amanda McWhirt, extension horticulture crop specialist for the Division of Agriculture, is the primary investigator for a research project she said will last about five years, involving the use of what is known as a rotating cross-arm — or RCA — trellis in the cultivation of blackberries. Unlike a traditional, static trellis, on which blackberries grow vertically, the RCA trellis provides a near-horizontal platform that can rotate 100 degrees.

“The idea is that you can rotate it onto one side, so that the flowers come out on the top side,” McWhirt said. “Once flowering is complete, you rotate it 100 degrees, so that all the berries are then on one side of the trellis.”

While blackberry production is a relatively small slice of the state’s agricultural pie, berry varieties developed by the Division of Agriculture are in high demand, grown both in-state and around the world.

The RCA trellis was originally developed by Fumiomi Takeda, a research horticulturist for the U.S. Department of Agriculture’s Agricultural Research Service in West Virginia. Takeda said he developed the original RCA trellis model in about 1992. The technology is currently sold through a limited number of manufacturer-retailers, including Trellis Growing Systems in Fort Wayne, Indiana and Atlas Greenhouse Systems in Alapaha, Georgia.

“Just last week we discovered someone else is making these in the Ukraine,” Takeda said. “They grow blackberries there, and it’s a very cold, harsh environment at times.”

While the RCA’s horizontal platform lends survivability to relatively fragile berries in cold climates by making it possible to lay blankets over them, McWhirt’s research here in the southern plains is geared toward maximizing production, reducing chemical inputs and avoiding common problems.

“In the South, we’re not so concerned about the temperatures getting low,” McWhirt said. “We’re doing it because you can orient the trellis so that the berries always stay in the shade. That’s one of our biggest issues in the South: We get a lot of weird fruit disorders, where blackberry druplets, the individual cells, will turn white, or you’ll pick them when they’re black, but in the refrigerator, they’ll turn black to red, and grocery stores don’t want to buy them that way. So putting them in the shade reduces temperatures, and helps to avoid lot of those disorders.”

Jackie Lee, extension horticulture and integrated pest management specialist for the Division of Agriculture, is also involved in the trellis research, and will be studying the efficacy of fungicides and insecticides applied to blackberry plants on the RCA trellis.

McWhirt said that most blackberry growers in Arkansas grow between two and 10 acres of the fruit, with an average of 1,210 plants per acre, using traditional trellising systems. She said that growers typically yield 10-15 pounds of berries from each plant, although plant variety and weather conditions always affect yield.

McWhirt estimated that an RCA trellising system could cost two to three times what growers now pay for traditional trellising, which costs between $3,000-$5,000 an acre. And while an RCA system typically reduces input costs such as plants and chemicals, there may be additional labor costs associated with workers training the blackberry canes to the trellis system. McWhirt and her team plan to evaluate the economics of the system as part of their research, she said.

McWhirt said blackberry plants were first attached to the RCA trellis system at the Clarksville station in May. The first year of the project will be spent getting the plants established, followed by another four to five years of data collection and preliminary research.

“The biggest question we’re trying to answer is one of whether growers will get more yield per foot of linear growth with this trellis system,” McWhirt said. “With this system, you actually have fewer plants per acre, so that cost is lower. But you’re actually getting more fruiting laterals per linear foot of row, in theory, so there’s more places where fruit can be produced.”

To learn about blackberries in Arkansas, contact your local Cooperative Extension Service agent or visit www.uaex.edu.