STUTTGART, Ark. -- A string of hot and steamy nights has led to an increase in both bacterial panicle blight and sheath blight in Arkansas’ rice crop.

“In the last couple of weeks, we got rain without a substantial decrease in day or night temperatures,” said Yeshi Wamishe, extension rice pathologist for the University of Arkansas System Division of Agriculture. “Although it appeared good for the rice crop, the conditions seemed to favor the development of both bacterial panicle blight and sheath blight.” 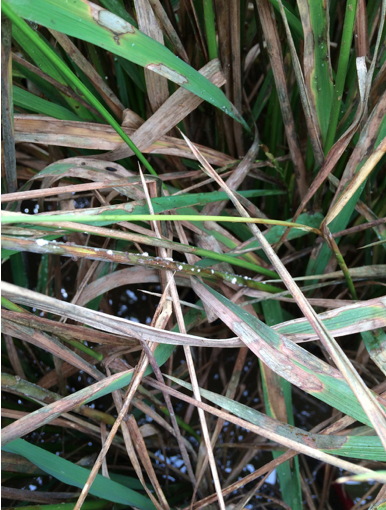 SHEATH BLIGHT — Development and spread of sheath blight disease of rice under high heat and humidity. The white sclerotia formed to survive long in soil after the rice crop harvested. (U of A System Division of Agriculture photo)

She said that the bacteria that causes the panicle blight are largely seedborne, following the rice canopy upward until heading. Chemicals are not used to manage this disease.

“However, rain, particularly windy rain, plays a significant role in the spread of the bacteria and in the intensity of symptoms – assuming the infected plants are a susceptible variety,” she said.

When looking for bacterial panicle blight, growers should use caution “since there are other factors that can cause similar symptoms,” Wamishe said. “For symptom confirmation, contact your county agent.”

After a very slow start in July, Wamishe said that “in a short time under the prevailing high heat and humidity, sheath blight is picking up both vertically and horizontally. Therefore, it is important to scout and take timely action.”

She said that fungicides were not recommended for sheath blight after the rice heads began filling.

The frequent rain has also been favorable for development of rice blast – an unpredictable disease that has a talent for surviving in a variety of conditions. Wamishe said the timing and frequency of fungicide applications is important in managing this disease.

Different varieties of rice have different susceptibility levels to neck and leaf blast and that puts a premium on “being ahead of the pathogen about timing of fungicide application,” Wamishe said. “Once the panicle necks are full out of the panicle booth, we cannot go back. It’s already too late.”