By Mary Hightower
U of A System Division of Agriculture
Aug. 9, 2016

LITTLE ROCK – The invasive emerald ash borer, already found in 10 central or southern Arkansas counties, has now been confirmed in the state’s northeast – in Randolph County along the Missouri border, Scott Bray of the Arkansas State Plant Board said on Tuesday. 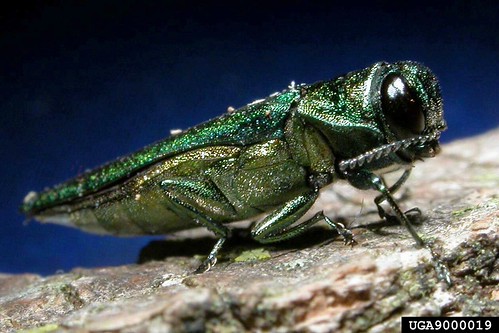 “The new confirmation in Randolph County is adjacent to a known infested county in Missouri, indicating that EAB naturally progressed from Missouri into Randolph County,” said Chandler Barton with the Arkansas Forestry Commission.

In 2014, the emerald ash borer had been confirmed in Bradley, Calhoun, Clark, Columbia, Dallas, Hot Spring, Nevada Ouachita, Union, and Saline counties, and the State Plant Board established a 25-county quarantine area in an effort to limit the beetle’s expansion within the state.

“An expansion of the quarantine is possible, and will directly depend upon further EAB trap findings and a meeting of the Arkansas State Plant Board,” Bray said.

Quarantined items continue to include firewood of all hardwood species, and the following ash items: nursery stock; green lumber with bark attached; other material living, dead, cut or fallen including logs, pulpwood, stumps, roots, branches, mulch and composted/uncomposted chips (1 inch or greater). Firewood is the only quarantined item that relates to all hardwood; all other quarantined items are relative to ash, only.

The half-inch metallic green ash borer is an invasive beetle from Asia that was first discovered in Michigan in 2002. It is blamed for the deaths of millions of trees and has been found in more than 20 states and Canada.

Know the signs and symptoms

“The best thing people can do is pay attention to their trees and don’t move firewood,” she said.

For more information about the emerald ash borer, visit  http://bit.ly/ArkEAshBorer.

A fact sheet about the borer may be found at: “Emerald Ash Borer: A pest of ash trees in Arkansas,” downloadable at www.uaex.edu/publications/pdf/FSA-7066.pdf."

For further quarantine details, contact the Arkansas State Plant Board at 501-225-1598 or email eab@aspb.ar.gov.