Their cachet is such that tradition has one variety ringing in each New Year for luck as “Hoppin’ John” and come summer, another variety’s are celebrated to the sound of revved up rotary tillers at the Purplehull Pea Festival in Emerson. In the kitchen they make friends with hog jowls and okra; and add earthiness to stews, soups and salads in recipes that cross the boundaries of world cuisine.

They are the southern peas, or more modestly, cowpeas. 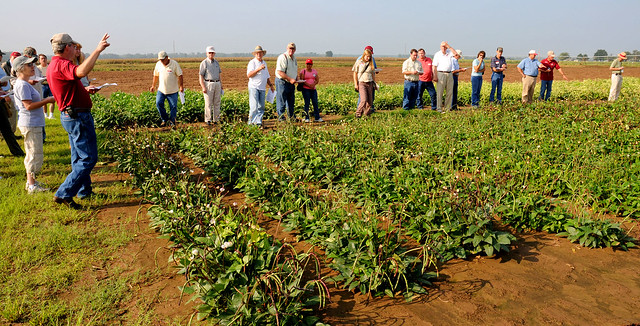 SOUTHERN PEAS -- Pea growers, processors and seed dealers learned about the southern pea program at the University of Arkansas System's Division of Agriculture during a field day Aug. 22 at the division's Vegetable Research Station near Kibler. Visitors tour southern pea research plots during the field day. (U of A System Division of Agriculture photo by Fred Miller)

This week, the southern pea takes center stage at the University of Arkansas System Division of Agriculture’s Vegetable Research Station in a field day that will highlight a breeding program that has released 20 improved pea varieties since it began more than 60 years ago.

Over the years, the strength of Arkansas’ pea crop placed it seventh nationwide in the 2012 Census of Agriculture, with peas harvested from nearly 1,400 acres.

“They have been a focus of breeding and research at this station since the early 1950s,” Dennis Motes, director of the station. The Vegetable Research Station was established at Van Buren in 1948 and moved to its current location near Kibler in 1974.

The Division of Agriculture’s early breeding program was a joint effort with USDA, Motes said, and resulted in three early southern pea varieties. Division breeders John Bowers and Teddy Morelock picked it up from there in the early 1970s and released 17 improved Arkansas varieties since 1973.

Pea breeder Ainong Shi directs the program now and will discuss his progress in breeding and genetics during the Aug. 12 field day.

The field day will begin with registration at 8:30 a.m. and the program begins at 9 a.m. Sessions on herbicide research and the breeding program will be followed by tours of breeding and research plots.

To get to the Vegetable Research Station from Interstate 40, take Exit 13 south through Alma, continuing 4 miles south to Kibler. Turn south on Thornhill Street to the station.

News releases and photos are available online at

Dennis Motes, director of the Vegetable Research Station, left, shows visitors southern pea breeding plots during a University of Arkansas System Division of Agriculture field day. A southern pea field day is set for Aug. 12 at the station near Kibler.

Media Contact: Fred Miller
Science Editor
U of A Division of Agriculture
479-575-5647, fmiller@uark.edu