Hutchinson: In rice to Cuba and other export markets, Arkansas needs to be No. 1
skip to main content

Hutchinson: In rice to Cuba and other export markets, Arkansas needs to be No. 1

STUTTGART, Ark. – Arkansas, already No. 1 in U.S. rice production, needs to be No. 1 when it comes to rice exported to other markets, Gov. Asa Hutchinson told a crowd some 500 packed into the Grand Prairie Center for the Arkansas Rice Expo. 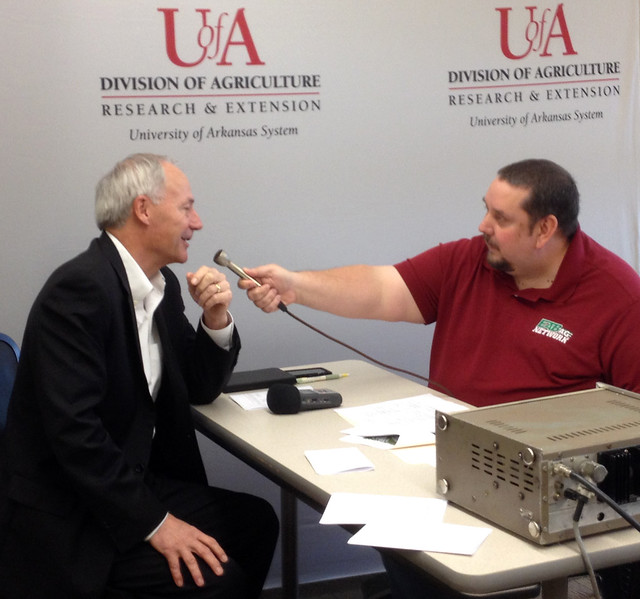 “We have an opportunity to expand the Cuban market,” he said in his keynote on Friday. “While I am very concerned about their suppression of human rights, I also recognize that agricultural products should not be used as a tool for foreign policy.

“And as they expand their market and their tourist opportunities, which is going to happen in the coming years, there’s going to be more demand for rice,” Hutchinson said. “Arkansas needs to be there at the table and to be No. 1 in exports to Cuba and other global markets.”

Earlier in the day, Keith Glover, president and CEO of Producers Rice Mill, said that exports will be the key to determining the price of U.S. long-grain rice in the coming year. The total supply is expected to be about the same as last year, which could help stabilize prices. Other factors that could influence the price include the extreme heat of recent weeks. Similar temperatures in 2010 and 2012 had adverse impact in those years.

In the market year that just ended, 88 percent of long-grain rice exports are shipped to Western Hemisphere nations. But South America is a key competitor for that market, Glover said. Asian rice is also selling cheaper than U.S. rice in global markets. Glover noted that last year, Iraq's purchase of U.S. rice was disappointing but Colombia's purchases helped pick up the slack. The industry is hoping that Colombia and Venezuela maintain last year's purchase levels. Lifting the embargo on trade with Cuba would also be a plus, he said.

The strong U.S. dollar is also potential problem for rice prices. "A high dollar is a silent killer of commodity prices," Glover said.

The Rice Expo is an annual celebration held by the University of Arkansas System Division of Agriculture.

On Thursday, a gold-spades-and-dirt-turning ceremony at the Rice Research and Extension Center marked the beginning of construction on the Foundation Seed Facility, an $8.6 million building designed to enable continued agricultural innovation, with researchers bringing new higher yielding, higher-quality crop varieties to market. The Foundation Seed Facility will be operated by the University of Arkansas System’s Division of Agriculture.

“We're pleased that farmers in the state decided this was a good use of their funds and that they wanted to be a part of this,” said Mark Cochran, vice president of the UA System Division of Agriculture. He noted that the current seed facility was constructed in 1951 and that the new building will accommodate the increased capacity of varieties that the rice program is handling. The faculty at the rice center has developed more than 40 varieties since 1930.

Foundation seed is seed stock produced from breeder seed under the control of a sponsoring institution. Registered seed is the progeny of foundation seed and used to grow certified seed that is used for crop production.

Before the groundbreaking, Cochran welcomed legislators to the center for a joint meeting of the Senate and House Agriculture Forestry and Economic Development committees. Cochran told the legislators that Arkansas grows the majority of rice produced in the U.S. "We're an impartial source of science-based solutions to relevant problems of the state,” Cochran said.