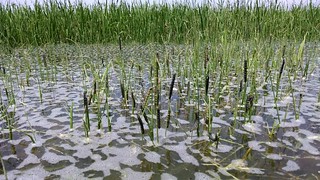 HEADS ABOVE  WATER -- Flooding in rice in Philips County, Arkansas, forces hungry army worms to cling to rice to keep heads above water.  Taken July 2, 2014. (U of Arkansas System Division of Agriculture photo by Robert Goodson)

LITTLE ROCK – Flooding has caused $35.6 million in lost crop value, but the full extent of the damage won’t be known until after harvest, according to economists with the University of Arkansas System Division of Agriculture.

While the flooding this year was not as widespread as in 2011, “the timing of the floods this year occurred late enough that replant options were limited and highly risky,” said Mark Cochran, vice president-agriculture for the University of Arkansas and head of the U of A System Division of Agriculture.

By comparison, the 2011 flooding on the Mississippi and its tributaries cost Arkansas crop farmers $335 million in damage.

“This year’s damage can be categorized into four general classes: total loss with no replant; costs of replanting the same or alternate less profitable crop; yield losses and increased production costs due slowed crop development and late planting date; and prevented plantings,” Cochran said, adding that “while preliminary estimates are available from some damage, a more complete estimate will be possible only after harvest yields are available.”

The study outlined four classes where value was lost:

Flanders and Watkins found that soybeans suffered the most, with losses pegged at $28.4 million. In other crops, value losses were:

Monroe, Poinsett, and Woodruff counties had the greatest value losses with each having more than $4.5 million in losses. They were followed by:

The effects of crop value losses will ripple into next year’s growing season, the economists said.

“Value losses in areas susceptible to flooding will negatively impact total farm profitability as commodity prices are decreased in 2014, and producers were already working with diminished profit margin potential,” said Flanders. “Value losses will have a negative impact on the producers’ ability to repay loans and meet long-term obligations.”

“With prices projected to remain low, losses due to flooding this year could impact the ability of producers to obtain operating loans for the 2015 production year,” he said.

Watkins said that flood damage can also have ramifications on the likelihood of crop insurance indemnities being paid.

“Unlike drought, which can more uniformly affect an entire insurance unit -- the acreage covered by crop insurance for a specific crop -- flood damage is often more area-specific,” he said. “It is possible for a portion of the covered crop acreage to be lost to flood damage without any indemnity payments being triggered.

“For example, a producer could lose a field of a particular covered crop to flood, but the actual crop yield for the entire insurance unit inclusive of the flood-damaged field could still be high enough not to trigger a crop insurance indemnity,” Watkins said.

Summaries of the 2013 crop yield and other production information may be found here: www.nass.usda.gov/Quick_Stats/Ag_Overview/stateOverview.php?state=ARKANSAS.

The study may be found online:


By Mary Hightower
U of Arkansas System Division of Agriculture