By Ryan McGeeney
U of A System Division of Agriculture
April 19, 2019

LITTLE ROCK – The value of the state’s No. 1 crop fell by 15 percent in 2018 as the effects of an ongoing trade dispute between the United States and China took hold through the summer. 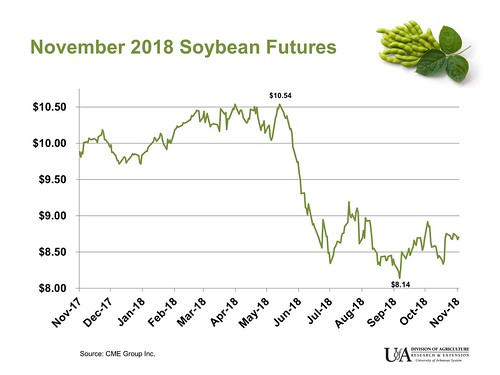 A report from the U.S. Department of Agriculture examining crop values from August through December of 2018 shows the overall value of Arkansas soybeans in the marketplace dropping from about $1.74 billion in 2017 to about $1.49 billion in 2018. Nationally, the value of the U.S. soybean market dropped 5 percent, to about $39.1 billion.

Scott Stiles, extension economist for the University of Arkansas System Division of Agriculture, said the drop in market value is largely attributable to the trade dispute with China. The United States is also sitting on record stockpiles of soybeans, following three straight years of record production, he said.

“These prices don’t take into account the discounts a given grower may receive for quality,” Stiles said. “These are the actual prices received — excluding discounts — for the crop during that period of time, August to December.

“Soybean prices dropped sharply from about June 1, and lost $2.40 per bushel by mid-September,” he said. “Much of the price drop was tied to China placing a 25 percent import tariff on U.S. soybeans. And once the tariffs were placed, export sales to China just stopped completely.”

Arkansas rice was the biggest winner among the state’s major commercial crops in the latter half of 2018, as harvested acres rebounded a year after the torrential flooding cut the fortunes of many growers.

Arkansas cotton, cottonseed and corn grain all saw modest gains. Sorghum, while actually gaining the greatest increase in market value in the report, rising 67 percent over 2017 to a market value of about $2.9 million, remains one of the state’s smallest commercially-produced row crops, with 10,000 acres harvested.

Arkansas peanuts suffered the biggest market loss by proportion, dropping 31 percent in 2018 to a value of about $22.2 million. Stiles attributes part of the low sales to the third-highest peanut stocks on record since 1980. The biggest factor, he said, was the drop in harvested acres. Planted acres dropped from 30,000 in 2017 to 26,000 in 2018; of that, only 23,000 acres were harvested, primarily due to weather-related challenges.

“Nationally, peanut acreage is projected to be up 2 percent this year, but Arkansas was projected to be down 4 percent, which surprised me,” Stiles said. “Growers are so frustrated with discounts and the price collapse in soybeans, I think a lot of them are looking at an alternative crop — and peanuts seemed to be an attractive alternative.

“However, the people who were growing peanuts last year had a very difficult time getting the crop harvested,” he said. “In the end, that might have done it.”