By the U of A System Division of Agriculture
April 9, 2019 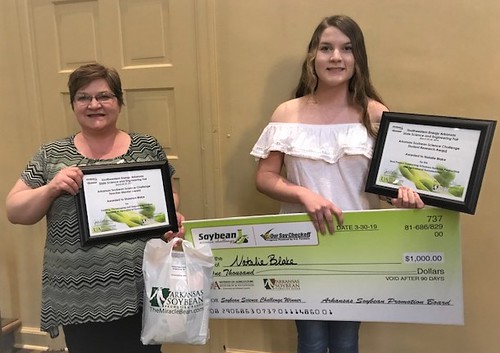 Natalie Blake, 16, won the state-level event with her project, “Differentiation in chloride absorption in Glycine max.” Blake previously took 1st place in the Southeast Arkansas Regional Science Fair at the University of Arkansas-Monticello, held March 12, with the same project.

The Arkansas Soybean Promotion Board, which sponsors the annual science challenge, awarded Blake $1,000 for her winning project. Blake received $300 earlier in March for winning the regional competition.

“My students learn about the sustainability of soybeans and the effects this crop has on Arkansas jobs and the economy,” Shannon Blake said. “They get their hands dirty, and they open up connections with others who have the same interests which could be valuable to their futures.

“Natalie gained the experience of competing against advanced projects,” she said. “With the large number of entries for the challenge this year, she really had to know her project and be able to explain and justify it. This gave her the opportunity to really think about the value of her project, and this gave her the confidence she needed to participate at state.”

Julie Robinson, assistant professor for the University of Arkansas System Division of Agriculture and director of the Soybean Science Challenge, said the competition helps students gain insight into how scientific research can have real-world impacts.

“The Soybean Science Challenge provides an opportunity for Arkansas high school students to participate in scientific research that can impact the State of Arkansas as well as the world,” Robinson said. “Student researchers learn about this important commodity crop and its many uses including feeding the world, development of biofuels and sustainable products. The Soybean Science Challenge helps students develop an understanding of the challenges and complexities of modern farming.”

The Arkansas Soybean Science Challenge was launched in January 2014 to science students in grades 9-12. Participants are required to complete an online course in soybean education in order to have their original soybean-related research projects judged at Arkansas science and engineering fairs affiliated with the International Science and Engineering Fair.

The competition is co-funded by the Division of Agriculture and the Arkansas Soybean Promotion Board.

Information on the 2019-2020 Arkansas Soybean Science Challenge will be available in summer 2019. For more information, contact Dr. Julie Robinson at jrobinson@uaex.edu or Diedre Young at dyoung@uaex.edu.