CLARKSVILLE, Ark. – Arkansas fruit growers are enduring a nervous week, sandwiched between two periods of freezing weather at a critical time for their crops.

This week, Arkansas’ fruit growers were assessing damage from last weekend’s freeze, while bracing for another round of cold. 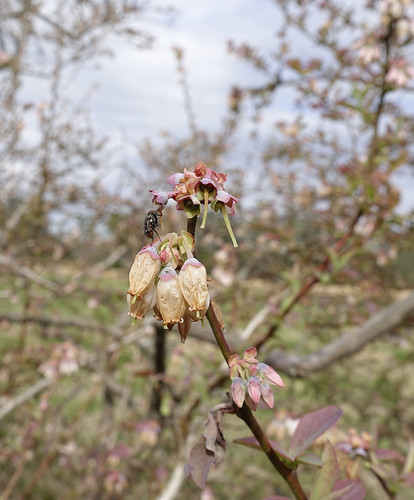 Early spring is a critical time for Arkansas’ peach, apple and berry growers as their crops put out fruit-making blooms. Damage to the flowers can translate into no fruit being produced. For grape growers, some are seeing the tender – and freeze-vulnerable -- first leaves or shoots on their vines.

In Washington County, where snow and sleet fell last weekend, “some of our growers are seeing some major losses,” said Berni Kurz, county extension staff chair for the Division of Agriculture. “Blueberry losses are cultivar dependent so not a total loss with later blooming varieties not showing any signs of damage.

There were “some reports of heavy losses on strawberries under floating row covers -- frost protection cloth,” he said. “Market gardeners have reported some losses on early season vegetables including broccoli, cauliflower and cabbage.

“What’s concerning is the low temperatures coming up this weekend,” Kurz said.

On Wednesday, the National Weather Service at Tulsa said that “additional freezes look likely in the next several days. Both Sunday and Monday mornings look like parts of far northwest Arkansas could see temps (of) 30-32 degrees.”

To cope, growers resort to floating row covers, burning hay in orchards to keep air temperatures above freezing for the trees surrounding the smoke and fire, and one grower has a helicopter to use its blades to fan warm air down into the orchard.

Ryan Neal, Benton County extension agent for the Division of Agriculture, has about four acres of blueberries. He uses an overhead watering system to protect the fruit from cold damage. While it sounds counterintuitive, keeping a wet icy layer on the fruit will maintain the temperature at 32 degrees, preventing damage. The technique does not work if the wind is blowing or it’s so dry the spray in effect becomes evaporative cooling. Neal has been using the system for two years and it covers about three-quarters of an acre.

“I’ll look to use it again Sunday night,” he said. Neal said he didn’t turn it on last Friday because he was expecting a stiff wind. “When I awoke, there was a zero mile-an-hour wind and it was 24 degrees. I did get some damage” to early-season blueberries.

“We had some damage, but it’s still too early to tell fully what that will mean,” said Dan Chapman, director of the Fruit Research Station for the University of Arkansas System Division of Agriculture, said on Wednesday. “We’ve had damage to our grapes, but it’s hard to tell since the leaves aren’t uncurled yet. We’ve got some damage to our blueberries. The peaches are still looking good.

“There are a lot of factors when it comes to freeze damage such as elevation. Humidity can matter, whether there’s moisture on the ground or the ground is dry,” he said. “A lot has to do with the wind too and if there is home heat above, when you have a temperature inversion.”

Had the cold come later in the season, after fruit formation, damage might be less.

“The fruit can take more than the blooms because they have some sugar in them to keep them from freezing when it’s 32 degrees,” Chapman said, adding he hoped that the temperatures this weekend would stay in the mid-30s.

Amanda McWhirt, extension horticulture crop specialist for the Division of Agriculture, said she’s heard of fairly “extensive losses to blueberries in several parts of the state particularly on northern and southern highbush, but some of the later rabbiteyes still look OK further south,” she said. “Peaches have damage from the Missouri border down past Little Rock. Some damage is very extensive and others is spotty based on the farm location and varieties planted.

Matthew Davis, Jackson County extension agent, said his largest strawberry grower get on did see damage and there “will be minor crop loss, but fruit load on strawberries looks heavy.”

McWhirt said most strawberry growers put covers over their low-to-the-ground crop and protect the plants effectively.

“Overall, nothing is a total loss statewide, but several individual growers seem to have extensive losses for individual crops depending on the crop stage of development and how cold it got there,” McWhirt said.

“Impacts of freezing temps this weekend being seen on corn,” he said Monday. “Looks rough now, will look worse over the next few days, but so far lots of healthy tissue below soil surface for recovery.”

On Wednesday, he posted a photo of a damaged corn plant where green was reappearing. Friday’s forecast calls for storms and high winds and hail are likely to be the most worrisome for row crop producers.